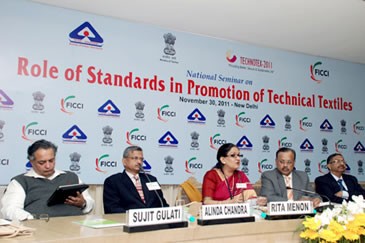 Ms. Menon said that speedy delivery of outputs in standards setting and a conducive regulatory framework along with the need to get an endorsement of the Textile Ministry efforts by other relevant ministries and departments was imperative to encourage industry to invest adequately in the technical textiles sector. Such a collaborative effort would help in raising the growth rate of the sector from the current level of 11 per cent to over 20 per cent year-on-year in the 12th Plan period. She asked industry to indicate their requirement of any new machinery for the production of technical textiles and avail of the capital subsidy under the Technology Upgradation Fund Scheme (TUFS). 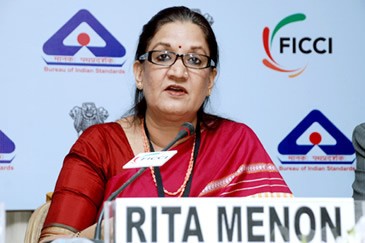 In order to expedite the process of standard setting, the Textile Commissioner’s office has constituted Committees for Standards at four of its Centres of Excellence (COE) in their respective segments. These committees are entrusted with the task of formulating draft standards in their respective areas and their notification through BIS. Four more committees on standards, for the remaining COEs, will be notified shortly. In addition, a monitoring committee under the chairmanship of Joint Secretary, Textiles, with representatives from BIS and industry, has been set up to monitor the notification iof standards by BIS, Ms. Menon said. 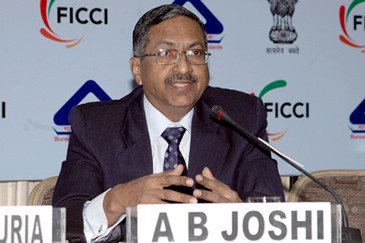 The Ministry is making special efforts to expedite the formulation of standards by the various technical committees in priority areas such as health, security and infrastructure, she said.

Earlier, Ms. Menon released a Compendium on Standards in the Technical Textiles sector. The compendium lists the existing standards, the status of proposed standards formulated by committees and submitted to BIS and standards identified by the Standards Committee of respective COEs.

Mr. Alinda Chandra, Additional Director General, BIS, stated that BIS has already brought out a number of standards on technical textiles. These include those that are of importance to the testing & Research laboratories, end users, manufacturers and technologists. These standards also provide significant help to the designers and field engineers. Notwithstanding the work related to standardization done already by BIS, a great deal of effort is still required, particularly, in the sub-sectors such as geotech, buildtech, agrotech and medtech so that the latest product standards and relevant codes of practices can be developed expeditiously.