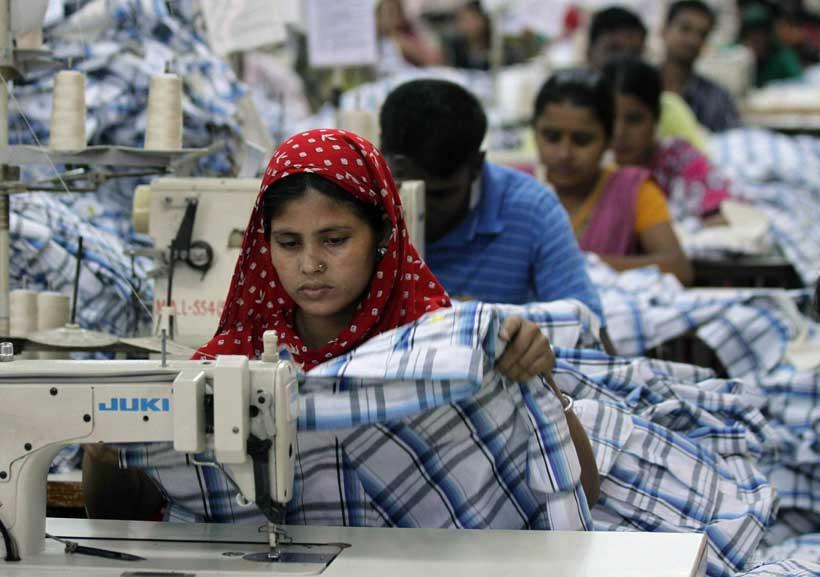 The Ready-made Garment (RMG) industry is the largest employer of women labour force and this sector is currently under stress due to Covid-19. According to Labour Force Survey 2017-18, those who train to work in the RMG sector is dominated by females and the ratio which interestingly is 3.5 per cent males to 10.2 per cent females. Though, this ratio has reduced if one compares the Quarterly Labour Force Survey of 2017-18 to the data of 2015-16, which puts the ratio at 8.6 per cent of males to 20.6 per cent females who participate in the training programme that open up the opportunity to be employed in the RMG sector. There are 1.7 million males and 1.5 million females who are working in RMG sector. Compared to other professions, women employment is the highest in garment sector. The impact of Covid-19 on the Ready Made Garment (RMG) Industry that employs large number of workers, especially the females, is going to be huge. The unemployment would severely affect their families and several others who are dependent on their meagre income and this may create social unrest. Mostly in the urban areas, 13.5 per cent of the households are headed by the females.

The garment sector has seen a decline in export. Already in the garment sectors, many factories are closed due to the lockdown rendering many people jobless. The situation of employment is extremely bad. This can be gauged from the fact when there was rumour that factories are reopening, most of the workers who had left for home when government announced lockdown, rushed back – some walking and some by bribing the driver of whatever vehicle they could get to travel to their work place to collect their salaries for March and to join fearing loss of job if they do not join work. Unfortunately, they found the factories still under lockdown and many of them are yet to receive their salaries. The Bangladesh Garment Manufacturer and Exporter Association (BGMEA) issued a directive to factory owners to pay wages.

The garment owners are equally facing financial trouble as orders are getting cancelled and rescheduled due to Covid-19. Therefore, for the owners to pay the workers is also becoming difficult. In a joint statement of STAR Sustainable Textile of the Asian Region of which the BGMEA is a part, made a request to the global brands to “take delivery or shipment, and proceed with the payment as agreed upon for goods already produced and currently in production with materials ready, and not cancel orders which are already in production; offer fair compensation to suppliers (100% FOB) if production or delivery has to be suspended or stopped, or offer salaries directly to workers of suppliers” among several other demands. According to BGMEA, out of 4,200 factories, 1,143 factories have reported a loss of US $3.17 billion affecting 2.27 million workers due to cancellation of orders to the tune of 980 million pieces.

According to a report, Bangladesh imported textile fibre and articles worth US $5.02 billion, out of its total $13.63 billion import, from China in fiscal year 2018-19. In February itself, the BGMEA wrote a letter to the Prime Minister highlighting how due to Covid-19 in China, import of raw material that largely feed the garment industry is getting affected. According to another report, “the import from China was 41 per cent of the total import of cotton, cotton yarn/thread and cotton fabrics valued at $7 billion in the last fiscal year”. According to Bangladesh Bank, in 2018-19, cotton, manmade fibre, knitted fabric, etc. constituted 41.3 per cent of total import from China.

In Bangladesh, after the woven garments, the knitwear sector is the second largest contributor to revenue and together with the readymade garment industry; in the last financial year, they contributed 84.2 per cent of total export earnings. Currently, the industry employs about 4.2 million workers, of whom 90 per cent are women, mostly from the rural areas. It is interesting to note that garment sector is registering loss of revenue since last year. Export earning reduced by 7.74 per cent between July to November 2019. While 61 factories have been closed leading to 31,600 workers losing jobs. However, new opportunities were also created with the establishment of 58 new garment factories which employs almost 60,000 workers. In spite of the opening of new factories, there is a downward trend in export for various reasons even though there is a forecast that the US-China Trade War would benefit Bangladesh garment industry, the result is mixed given the globalisation. The data of Bangladesh Bank showed that in manufacturing sector, the following sectors registered downward growth: Knitwear (-$5.13 million), Woven garment (-$6.29 million), Home textile (-$9.70 million), Special textile (-$9.97 million); all registered negative growth from July to January (FY 2019-20), when compared to the same period (FY 2018-19). Bangladesh’s import of yarn is also reduced by 22.44 per cent in the same financial year. Import of raw cotton, textile articles and staple fibres from various countries showed a reduction. This reduction in imports reflects that the RMG sector is facing challenge; because there is no evidence of import substitution of these items. There has been a discussion for some time in Bangladesh at the need to diversify its RMG export and move away from producing low end products like T-shirts, shorts, trousers, etc. to high end garment production sector. Diversifying export basket has remained a major challenge for Bangladesh.

The other factor that is going to be a challenge for the RMG and Knitwear sector is Bangladesh’s graduation from LDC to Middle Income country in 2021, therefore duty free – quota free access which has helped Bangladesh’s RMG sector to grow to become second largest exporter, would no longer be available. It would now be subjected to Generalised System of Preferences (GSP) rule of the European Union, which is a major destination of Bangladesh RMG. According to a study by ECOSOC, Bangladesh “would face tariffs of 9.6 per cent in the EU under the GSP”. It has to undergo stringent rule of origin and lose concession it is getting as LDC and this will affect woven garment sector the most. Bangladesh, however, can apply for GSP+. While these are the challenges that need to be taken into account, the Covid-19 outbreak has further added to its woes. The closure of the factories for a month would impact both the industries as well as the workers. The stimulus package of US $590 million announced by Prime Minister Hasina specifically for garment industries to overcome short term crisis of paying wage and the offer of US $3.5 billion capital loan with lower interest is unlikely to help the industry much which employs largest number of workers. Moreover, both United States and Europe are witnessing highest number of people with infections as well as death from Covid-19, generating a health crisis there. Bangladesh’s RMG export to USA has increased by 4.5 per cent in 2018. The US remains single largest market for Bangladesh’s garment industry. Its export to the EU constitutes 56.4 per cent of its total export. The lockdown in these countries would have severe repercussion not just on their economy and would impinge on Bangladesh’s economy as export to these countries may witness a decline. Already the signs are there where orders are being cancelled.

Many of the garment factory owners are also Members of Parliament. According to Shushasoner Jonno Nagorik (Shujan), 182 businessmen have been elected as lawmakers in 11th General Election. This amounts to almost 61.07 per cent of the total members of the parliament. The businessmen-politician nexus has not helped much needed reform in the garment industries in Bangladesh. There are other problems like frequent strikes called by garment workers due to poor wage and safety of work place. These factors, however, are constant. Post-Covid-19, there is a possibility of garment workers demanding high pay as the inflation rises. Some of the garment factories are schedule to open from 28th of April and the workers staying near to the factory would join work. It is equally true that many garment workers staying in other areas would attempt to join due to the fear of losing jobs and new jobs would be difficult to find.