Meet the Plastic President
The Hilarious Mannequins Made to Resemble Obama

His likeness has been commemorated on T-shirts, mugs, plates, and even bobbleheads. But now President Barack Obama has been celebrated in a much more lifelike manner – as a mannequin. A Las Vegas company – Las Vegas Mannequins (http://www.lvmannequins.com) – says the demand for a Barack Obama mannequin was so great that they decided to produce it for retail use.

One of these things is not like the other: The Las Vegas company said its Obama mannequins have ‘realistic facial and physical features’ (though it’s not hard to pick out who the real president is). The likeness of the 44th president of the United States has been immortalised in fibreglass, and shows his signature cropped haircut, brown eyes, and cool-as-a-cucumber demeanour. 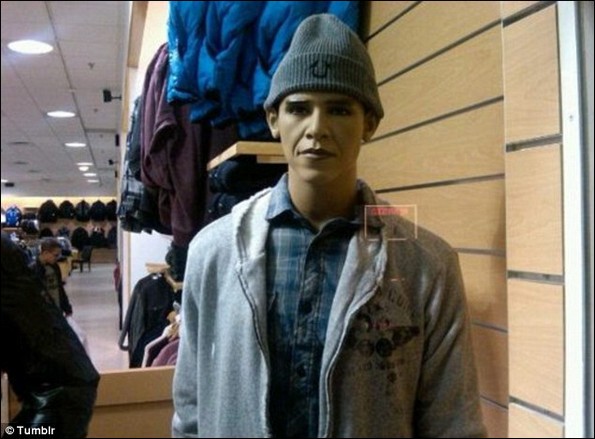 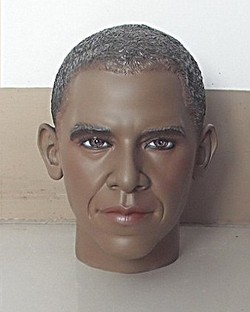 The mannequin’s expression is reminiscent of when the president is relaxing. Las Vegas Mannequins say they offer two separate types of the Hawaiian-born president. ‘These fibreglass-constructed mannequins have two different presidential styles to choose from, full body or just a head.’ They say the demand for a mannequin Barack Obama has been overwhelming. The site says: ‘Now when someone asks if we can sell them one, we can respond “YES WE CAN!”’

The full-length mannequin (price : $350.00) boasts a surprisingly sculpted physique, showing defined muscles and a toned six-pack. It is perhaps a generous interpretation of the 50-year-old president’s physique, despite the fact Mr Obama remains active. The mannequin comes with a handy metal platform to support the plastic president. The site boasts that the Barack Obama head mannequin has ‘great realistic facial and physical features to give them a unique appearance.’ The mannequin was spotted recently by a Tumblr user. The ‘president’ was sporting a grey hoodie, blue plaid shirt, and a grey beanie.