The Cloth Sellers Association (CSA) in the Sekondi-Takoradi Metropolis has called on the Government to strengthen security at the country’s borders to prevent the illegal importation of textiles. Members of the association noted that tight security at the sea, land and air entry points of the country would discourage the influx of foreign textiles on the Ghanaian local market. Madam Esther Nyantakyi, Spokesperson, made the call in a statement read at a press conference in Takoradi in reaction to the seizure of quantities of bales of textiles by a national taskforce early this month. Madam Cecilia Ansah, secretary & Madam Theresa Cobbina, president of the CSA, jointly signed the statement.

Members of the Association argued out that as sellers, they buy their wax prints in the country for sale and not from outside therefore it would be wrong for them to be held responsible for the influx of imported textiles on the local market. “Why would the authorities not stop the entry of these imported cloths from the ports, borders or any entry point in the country but rather use us as targets”, Madam Esther Nyantakyi asked. She expressed surprise at the sudden attack on the members who were not notified of the action and pleaded that their seized wax prints be returned to them as they contracted bank loans to purchase them.

Textile dealers at the Takoradi Market Circle have vowed to go naked on the streets if their seized cloths suspected to be imitated Ghanaian prints are not handed over to them. Over 30 traders, who wore red bands expressed their anger about what they described as unfair treatment meted out to them by some Police officers and some persons claiming to be working for Akosombo Textiles Limited (ATL), Ghana Textiles Printing (GTP), Printex and Daviva on December 1, who raided their shops on and seized some 208 pieces of cloths. “The whole exercise was so sudden that as women who fear guns and other ammunition, some of our members, with all due respect, forcibly had their ‘periods’ (i.e. menstruated). Is that how women should be treated” Mrs. Esther Nyantakyi, the Association’s Spokesperson queried.

According to cloth merchants, the locally manufactured prints were too expensive hence their inability to make profits when they trade in those ones. “We would want to conclude that our seized bales of wax prints should be returned to us for there is a saying that if you want to see the nakedness of a woman, just seize her cloth”. So, the powers that be should not be surprised to see Takoradi Cloth Sellers Association going naked one of these days on the streets. And we mean it”. 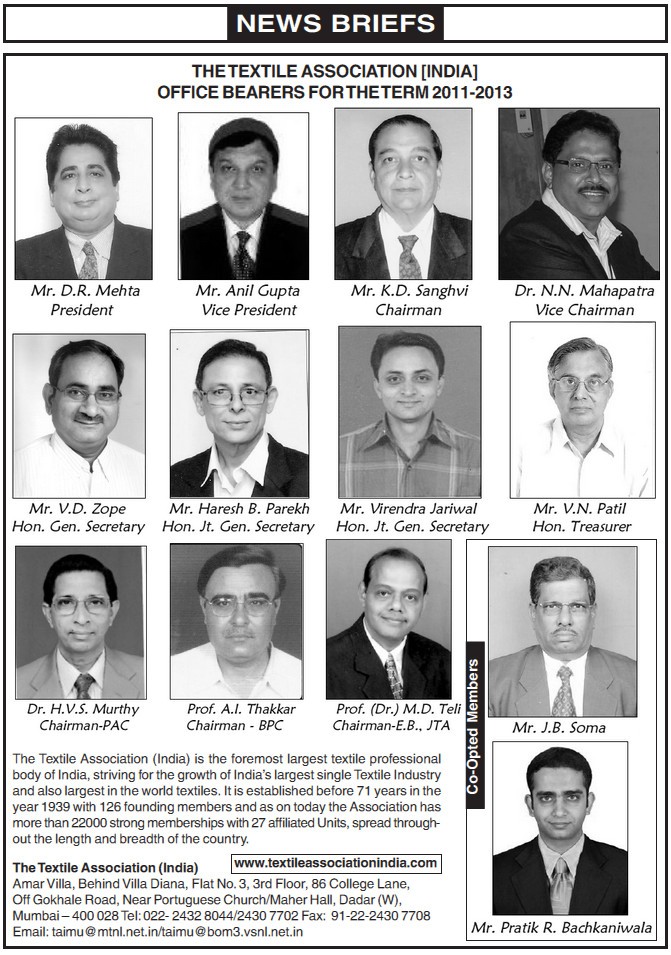 The Textile Association [India] Office Bearers For The Term 2011-2013