Jakarta : The market share of Indonesian textile and textile products in the Asean region has increased by about 10 percent in the last two years. “Indonesia’s textile performance also increased significantly. Its exports increased from US$300 million to US$1.3 billion,” Chairman of the Indonesian Textile Producers Association (API) Ade Sudrajat Usman said.

Usman said that the implementation of the Asean free trade agreement, which consisted of reduction or removal of import duties was the main factor that boosted Indonesia’s textile exports to the Asean region. “It (free trade agreement) gave us a bigger chance to exploit potential market in the Southeast Asian region such as Malaysia, Singapore and Thailand whose population has a higher purchasing power,” he said.

Therefore, he expressed the hope that textile trade in the region would continue to increase, particularly after the Southeast Asian nations had established an Asean Economic Community in 2015. “We also hope that trade would increase as well in the Asean partner states such as Japan and South Korea,” Ade Sudrajat added. He said that up to now, Indonesia’s biggest textile market was still the United States which reached 37 percent, followed by the European Union (14 percent), ASEAN (10 percent) and Japan (7 percent). Data at the trade ministry showed that Indonesia`s textile exports in the January – August 2011 stood at US$9.16 billion, up 23.4 percent in the same period a year earlier amounting to US$7.42 billion.

As is the case with textile manufacturers worldwide, Indonesia faces new competition in the global textile industry, especially in the US and EU markets. According to API, China has dominated the US market with its low-end products, but Indonesia’s “real competitor[s]” are India, Vietnam and Bangladesh for apparel; Thailand and Brazil for fabric; and Pakistan for yarn. 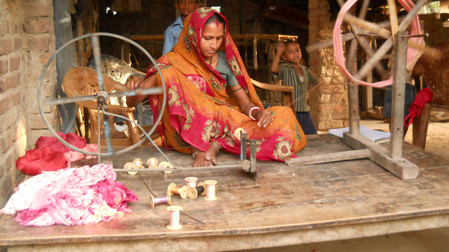