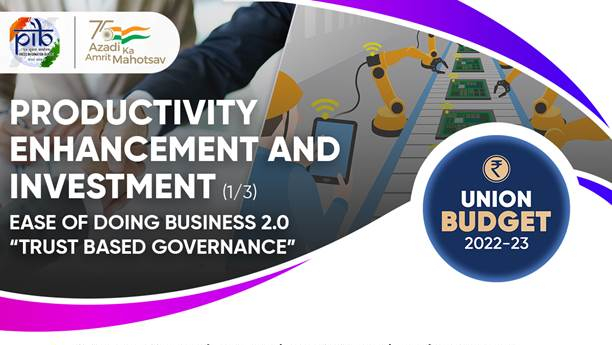 India, the second largest populous country in the world, could successfully fight against COVID-19 pandemic without compromising much on impact of the pandemic by bringing various unique and innovative relief measures and policy interventions that enabled the country to recover from the unforeseen crisis on a fast track.  India could also convert certain challenges like manufacture of indigenous PPE kits into opportunities and became the second largest manufacturer of PPE kits within few months which not only protected the people of India, but also the globe.  By covering over 150 crores of vaccinations during the last two years, the impact of COVID third wave and Omicron is much less in the country.  The Union Government has been constantly announcing several policies that are enabling India to attract large scale investments and alleviate unemployment problems.  The Union Budget 2022-23 is yet another boon for India to become superpower in the coming decades.

In a Press Release issued here today, Mr. Ravi Sam, Chairman, The Southern India Mills’ Association (SIMA) has said that the Union Government has already announced several unique schemes apart from boldly addressing certain structural issues on taxation front and raw material and substantially enhanced the global competitiveness of the Indian textiles and clothing industry, the second largest employment provider next only to the agriculture.  He has hailed the various announcements made with regard to infrastructure development, productivity improvement, digital world, industry 4.0, skill development with hub & spoke model infrastructure facilities.  It is heartening to note that the country is expected to grow at 9.27% in the coming year, a phenomenal achievement for any country in the post-COVID period, says Mr. Ravi Sam.   He has said that GST collection of Rs.1,40,986 crores for the month of January 2022, the highest since the implementation of GST, is an indication for the phenomenal economic growth of the Nation. He has added that four pillars of development viz., inclusive development, productivity enhancement, energy transition and climate action would boost the overall economic growth of the Nation.  Mr. Ravi Sam has welcomed the decision of extending Emergency Credit Loan Guarantee Scheme (ECLGS) till March 2023 to enable certain segments to gear up and achieve its potential growth.

SIMA Chairman has said that the allocation of Rs.17,683 crores to Cotton Corporation of India (CCI) to procure cotton for the years 2021-22 and 2022-23 under Minimum Support Price will help CCI to wipe out its losses incurred for procurement of over two crores bales of cotton during the last two years that had greatly benefited the farmers to sustain the area under cotton.  He has said that the steep increase in the international cotton price and consequential domestic cotton price has made the Indian farmers to fetch huge revenue for their produce during the current season, though it has impacted the cotton textiles value chain exporters.

Mr. Ravi Sam has said that India has started achieving substantial growth rate both in the domestic and international cotton textiles & clothing market that is likely to fuel the cotton consumption by 15% to 20% during the current season  resulting in shortage of cotton.   He has hoped that the Union Government would consider  the demand of exempting ELS cotton and sustainable cotton from the levy of 11% import duty as such specialty cotton is not produced in the country.  He has also hoped that the Government would allow duty free import of cotton to the actual users with some quantitative restrictions for the off season, as the country is likely to face shortage of cotton to the tune of 40 lakhs bales.  Considering the phenomenal growth of the industry and achieving the vision of doubling the textile business size in the next five years, it is essential for the Government to allocate necessary funds and announce Technology Mission on Cotton 2.0 on a war footing, says Mr. Ravi Sam.