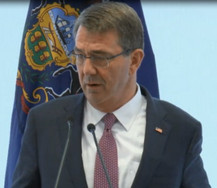 Eighth manufacturing innovation institute brings over $300 million in public-private investment from leading universities and manufacturers to develop futuristic fabrics and textiles, helping accelerate the revival of textiles manufacturing in the United States

On April 1, Secretary of Defense Ash Carter announced that a leading consortium of 89 manufacturers, universities, and non-profits organized by the Massachusetts Institute of Technology (MIT) will spearhead a new manufacturing innovation institute in partnership with the Department of Defense focused on securing U.S. leadership in revolutionary fibers and textiles manufacturing.

The new Revolutionary Fibers and Textiles Manufacturing Innovation Institute in Cambridge, MA, will combine over $75 million of Federal resources with nearly $250 million of non-Federal investment in innovative fabrics and textiles with novel properties ranging from being incredibly lightweight and flame resistant, to having exceptional strength and containing electronic sensors. With wide-ranging applications, these technical textiles can forge protective gear for firefighters impervious to the hottest flames, replicate the sensing capabilities of a smart watch into a lightweight fabric, or detect when a wounded soldier needs to be treated with an antimicrobial compression bandage.

This new institute is the eighth manufacturing hub to be awarded by the Obama Administration, building on the President’s vision to create a National Network for Manufacturing Innovation (NNMI) of at least 15 hubs across the country during his Administration. Collectively, the Federal government’s commitment of nearly $600 million to the eight awarded institutes has been matched by over $1.2 billion in non-Federal investment from across industry, academia, and state governments. The institutes, each led by manufacturing experts renowned in their field, have attracted over 800 companies, universities, and non-profits as members of the National Network for Manufacturing Innovation.

The American textile industry is adding jobs for the first time in decades, increasing shipments by 14 percent from 2009 to 2015, and growing exports globally with a 39 percent increase in exports from 2009 to 2015. After a decade in decline during the 2000s, the U.S. manufacturing sector as a whole has added nearly 900,000 jobs since February 2010. Today’s announcement builds on this momentum in American textile manufacturing and lays the foundation for future leadership and innovation in the production of sophisticated fibers and textile technologies.

To lead the new Revolutionary Fibers and Textiles Manufacturing Innovation Institute, MIT is standing up Advanced Functional Fabrics of America, or AFFOA, a new consortium headquartered in Cambridge, MA, uniting 89 partner companies, non-profits, independent research organizations, universities and start-up incubators to help ensure that America stays at the leading edge of fiber science and the production of modern-day fabrics and fibers with extraordinary properties.

This new manufacturing innovation institute will harness the Northeast region’s community of technical textile manufacturing entrepreneurs and innovators, strengthened by a robust nationwide network of manufacturers, to underpin a national fibers and textiles manufacturing ecosystem and position the US for growing leadership in this critical technology area.

The institute will work to commercialize innovations being developed in the labs of member universities including MIT, the University of Massachusetts – Amherst, Cornell University, and others, while partnering with local workforce organizations to train workers on how to manufacture these technologies in the United States. The institute will also accelerate technology transfer to enable defense and commercial applications such as shelters with power generation and storage capacity built into the fabric, ultra-efficient, energy-saving filters for vehicles, and uniforms that can regulate temperature and detect threats like chemical and radioactive elements in order to warn warfighters and first responders. The new institute’s headquarters in Cambridge, MA will host a prototyping facility designed to help start-ups test their first products and scale up new technologies into full production, to ensure that textile technologies invented in America are made in America.

The winning team includes the following 52 industry members and non-profit organizations, as well as 37 additional partners across 28 states:

The National Council of Textile Organizations (NCTO) welcomed the announcement