When Politics Takes Precedence Over Economics

I am supposed to write something related to textile and/or allied industries in my editorial because this is a trade publication and writing on politics may seem to be little misplaced. But I strongly feel that ultimately the political class is responsible for the country’s economic, social and cultural position.

Any mis-step in today’s highly interconnected, interdependent and conflicting world can cause immense harm to the country. But the governance requires making decisions and many times very hard and difficult decisions have to be taken rather quickly to have the desired result.

I tend to look at what the future has in store for all of us, in general, specially amidst rising geopolitical tensions in various parts of the globe that have brought powerful nations head-on. The countries openly involved are China, Japan, Vietnam, Russia, the US and the EU. China is involved in a maritime dispute in the East China Sea with Japan and over the South China Sea with Vietnam and the Philippines. Russian act of force in Ukraine has earned Putin the enmity of the United States and the European Union and they have imposed fresh sanctions on Russia. These sanctions have somehow brought Russia and China nearer. On the other hand, the US has made it clear that it is implementing its strategy of ‘rebalancing to the Asia-Pacific’ by having comprehensive partnerships and alliances (including military capabilities) with countries like Japan, South Korea, Vietnam, the Philippines and Malaysia.

The current world scenario is clearly giving an ominous sign that the future might be highly uncertain and fraught with hardship. Bloomberg has reported that China is hoarding crude at the fastest pace in at least a decade, shielding itself from supply disruptions and helping keep prices above $100 a barrel. The analysts are busy decoding the message hidden behind this development. The global tensions are creating much market volatility and also problems for multinationals that rely on these countries for manufacturing.

With Narendra Modi becoming PM, most Indians’ hopes have obviously skyrocketed. The international community, however, is feeling left in doubt — as well as hope — about the economic growth under the new government and also about the foreign policy issues particularly in light of the above-mentioned difficult scenario. Whether India will decide to be closer to the US-Japan-EU or the China-Russia group will be keenly observed. This will also be an acid test for Modi’s governance on the global stage. In fact, this will also impact the country’s financial and economic road-map in the coming years. The current global scenario has intertwined so many countries, including India, in such a way that they may have to make their position clear sooner than they expect in order to decide the direction they wish to move on in the best interest of their people.

Let’s all hope for the best in coming years.

@Mela_Velo Project: Cycling improves the quality of life and slows down global warming 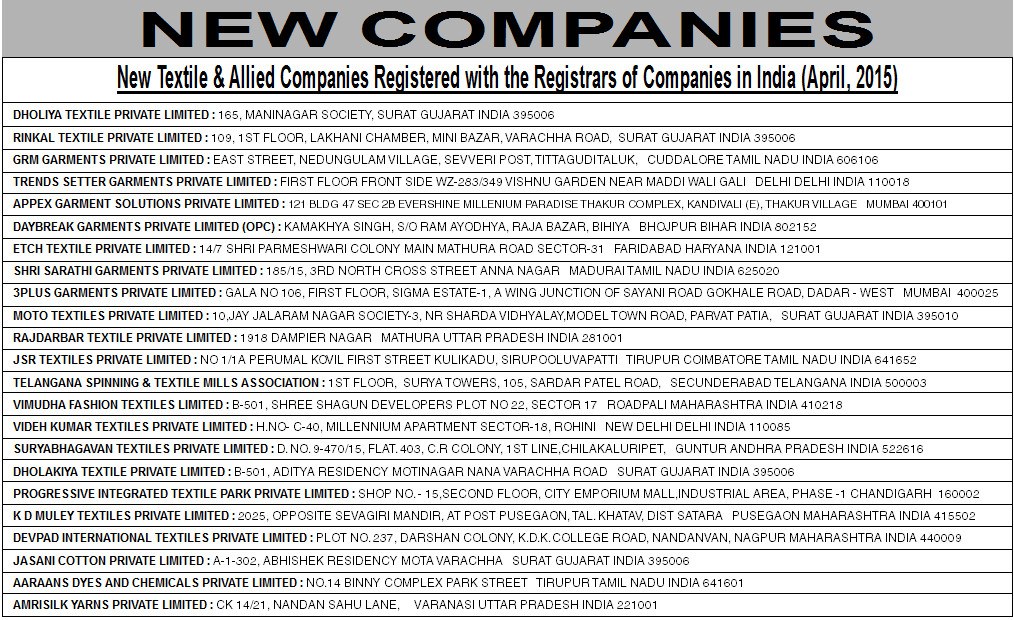 New Textile & Allied Companies Registered with the Registrars of Companies in India (April, 2015)