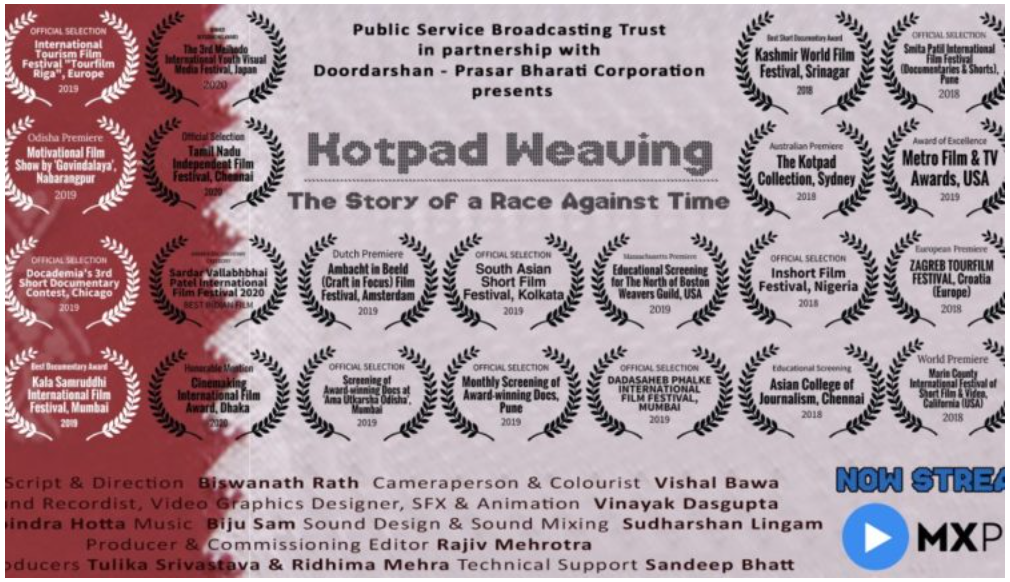 Bhubaneswar: The internationally acclaimed documentary ‘Kotpad Weaving: The Story of a Race Against Time’ has premiered on MX Player on June 23.

Directed and written by Biswanath Rath, it had earlier premiered on Amazon Prime (US, UK, Canada and Australia) on June 19, 2020.

As the name suggests, the English documentary focuses on Kotpad handloom, an unique tribal textile from Koraput district.

Prior to its OTT premieres, ‘Kotpad Weaving’ had received six awards and was in the ‘official selection’ in 33 International Film Festivals. It was also telecast on DD National on March 24, 2018.

Notably, the film is produced by PSBT and executed by BnR Films.

Talking about the premiere on MX Player, Biswanath told the media, “We are simply thrilled about this launch. MX Player is an international brand having over 280 million viewers. We feel honoured to have our award-winning documentary ‘Kotpad Weaving’ on this platform.”

He added, “On behalf of BnR Films, I dedicate this achievement to the extraordinary efforts of our financiers, cast and crew. It is because of them that this film has achieved so much in the past few years.”

The filmmaker further said that film festivals and awards give recognition to films, but leading OTTs provide the much-needed global reach to them.

“We are sure that this premiere of ‘Kotpad Weaving’ MX Player will create a new identity for Odisha and also inspire other filmmakers from the state to believe in their stories as well as in themselves,” he said.

One of them is ‘Ravaiyaa’ in Hindi. It is based on the story of migrant labourers and was made during the lockdown last year via remote direction using smartphones. The other two short films are ‘Desh Dosti Etc’ and ‘Kar Bhalaa’.

Watch ‘Kotpad Weaving: The Story of a Race Against Time’