The Cotton Textiles Export Promotion Council ( TEXPROCIL) has carried out a Benchmarking Study of Production Costs in India vis-à-vis Bangladesh, China ,Egypt , Indonesia , Pakistan and Turkey . This Study was released by Dr. Kavuru Sambasiva Rao, Hon’ble Union Minister of Textiles, Government of India at a function in New Delhi at Hotel Le Meridien on 25.7.2013. 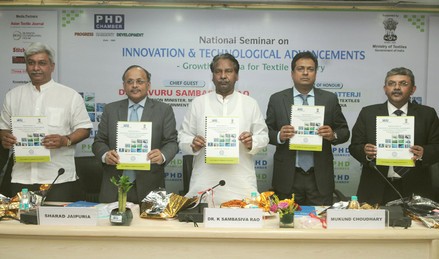 The Union Textiles Minister, Dr. K.S. Rao appreciated the efforts of the Council in carrying out the study which has revealed India’s position in textiles exports vis-à-vis its competitors. The Minister assured of all Government support to the exporters in taking exports of textiles to greater heights. 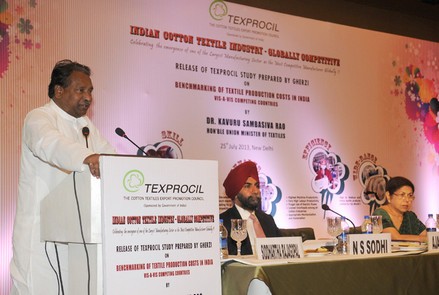 The Textiles Minister addressing the gathering at the Texprocil event

The Secretary (Textiles), Smt. Zohra Chatterjee expressed her satisfaction at the Study Report and sought inputs from the Council to increase exports. Both the Minister and the Secretary textiles announced that the TUF Scheme will be released shortly.

DGFT, Dr.Pujari in his address said most of the representations received form TEXPROCIL has been addressed. He also said the representations of TEXPROCIL are of high quality backed by thorough home work. He invited suggestions to make the Foreign Trade Policy & Procedures more smooth and exporter friendly.

Earlier in his welcome address Shri Manikam Ramaswami, Chairman TEXPROCIL said Indian textiles have achieved Global competitiveness and should now look forward towards a golden era of increased exports and greater market penetration. He said in the last 5 years the Indian textile industry has made very low average profit. However, he pointed out that most of the textile manufacturing units in India are following ‘Lean Manufacturing” and have adopted Quality Control programmes like Kaizen etc.

In the case of yarn exports, given India’s dominance in the global market, mills will have to pass on the Rupee depreciation fully to the customer .India is India’s own competitor in yarns! In the case of grey fabrics, our exporters should try to hold back some part of the rupee depreciation.
Countries which buy our grey fabrics will also be buying our yarns and converting them locally, though using their limited capacities. Hence only a part of the depreciation from Rs.53 can be retained by our exporters. But in the case of the dyed fabrics and “Cut and Sew”, it should be possible for the manufacturers to hold back the entire Rupee depreciation as we are the most competitive nation even at Rs.53 to a US$.
The decentralized sector too will find exports profitable, even though it has a 5% cost difference if the organized players appreciate the competitiveness India has gained and not throw away the goods. We in textiles have got used to very low profitability and in general do not have the confidence to quote prices with profits, but the time has come now to do so. We are hugely competitive and in sectors where our market share is below 10% in the global market, we should intelligently price our products with appropriate profits.
Manikam Ramaswami (Chairman, Texprocil)

Shri Ramaswami also mentioned that the In house training programmes carried out by the textiles exporters have transformed the workers into high quality world class operatives. 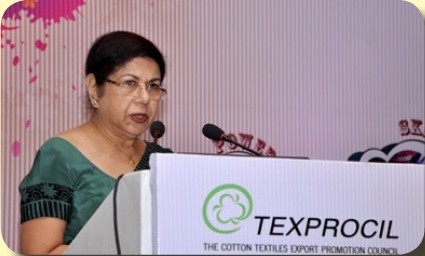 Secretary (Textiles) & Below : DGFT (Ministry of Commerce) addressing the audience.

The TUF scheme has rapidly transformed the textiles industry into a very modern industry with a very high degree of automation and modernization, said Shri Ramaswami. 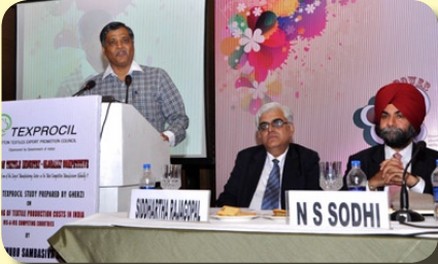 The Chairman also emphasized on the need to resolve certain incidental issues and has suggested to put in place a stable Cotton Policy. Shri Ramaswami expressed his satisfaction that the new textile minister has brought more energy , optimism an enthusiasm into the textile industry.

With regard to the study, it consists of a detailed analysis of the impact of various cost factors like wages, power costs, water charges, transport costs, exchange rates etc on the competitiveness of textiles in India and in other competing countries like China, Turkey, Bangladesh, Pakistan, Indonesia and Egypt. The study also outlines the support given by the competing countries to promote textile exports.

Some of the Highlights of TEXPROCIL Study are as under : 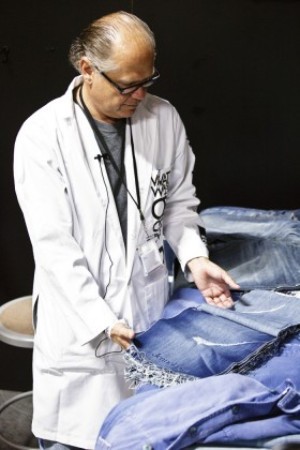 Jeanologia : The Spanish Company Specialising in the Science of Finishing