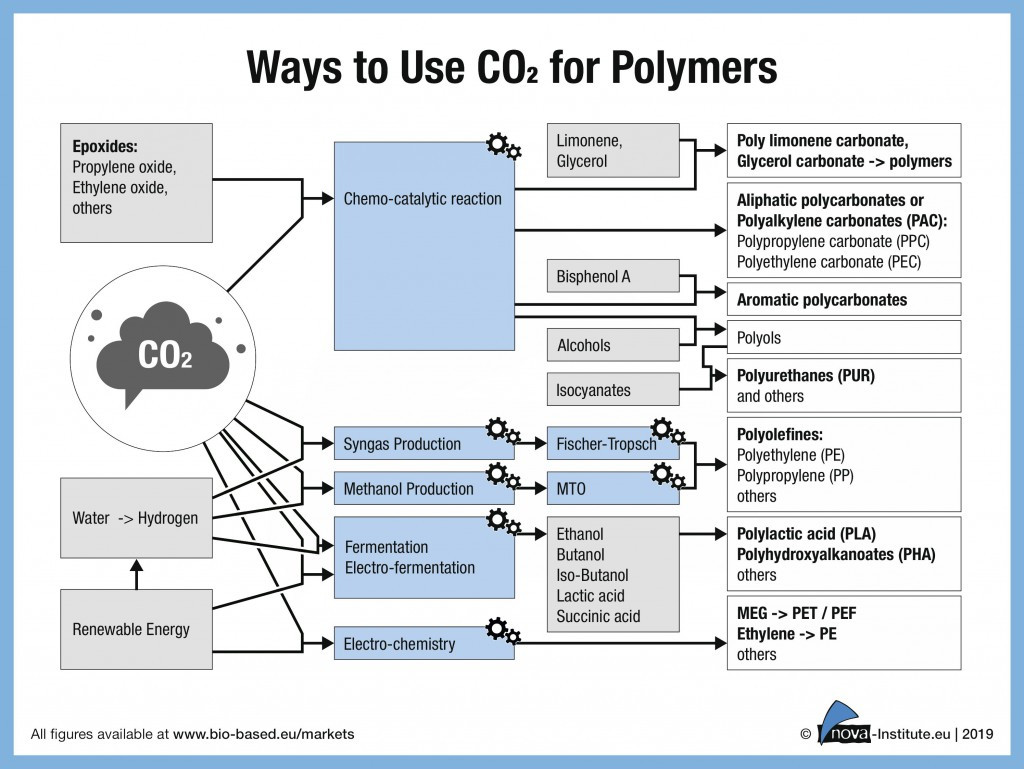 In March 2018, nova-Institute published the first worldwide technology study on this topic: “Carbon dioxide (CO2) as a chemical feedstock for polymers – technologies, polymers, developers and producers” which has now been updated comprehensively.

400 million tonnes of polymers are produced globally each year.

The amount has been growing by 3–4 % per year for decades and they have become an integral and important part of the modern world. Despite all their useful and versatile material properties, polymers face a major problem: 90 % of them are produced from fossil carbon and finally end up as CO2 emission. This has no future!

The organic chemistry and plastics sectors cannot be decarbonised, simply because carbon is the main atom in their material structures. In this context, renewable alternatives to fossil feedstocks are needed, which have already been available for a long time, thanks to intensive research. Chemicals and polymers are already being produced today using renewable carbon, which is carbon from biomass and recycling – and also from CO2. However, as the use of biomass and the recycling of plastics alone will not suffice, CO2-utilisation could be the solution to meet the demand of virgin polymers in the future (Carus et al. 2020).

nova-Institutes technology and trend report “Carbon Dioxide (CO2) as Chemical Feedstock for Polymers – Technologies, Polymers, Developers and Producers” examines this alternative, renewable carbon source in detail: which polymers can be produced from CO2, and by which processes? How far have the technologies already been developed, optimised and implemented in pilot, demonstration and (semi)commercial plants? Which companies and institutes are working on technologies to produce polymers or building blocks from CO2?

As nova-Institute shows in its report, the potential and the actual production capacity for CO2-based polymers is much larger than commonly assumed and discussed. The production capacity, mainly for polycarbonates and polyols for polyurethanes production, already amounts to more than 850 kt/a today, with an average weighted CO2-based carbon content of currently only 5.4 %. Nine companies were considered, mainly located in Asia, Europe and North America and are shown in table 1.

Catalysis is the key for CO2-conversion

The breakthrough innovations for CO2-utilisation have all been achieved using specifically designed catalysts. CO2 is a very thermodynamically stable molecule, so it requires a significant amount of energy to be activated. Accordingly, a catalyst must be used to reduce the energy barrier. Whether synthetic or bio-catalysts: most of the research on CO2-conversion to polymers focuses on the design of the appropriate catalysts. An introduction to catalysis in CO2-utilisation for polymers is included in the report.

Use of renewable energy to ensure sustainable processes

CO2-based products have significantly lower greenhouse gas emissions than comparable fossil products, if the energy used to convert the CO2 comes from renewable resources. The chemical industry’s carbon demand will continue to grow with an annual growth rate (CAGR) of 3–4 %. Calculations demonstrate that just 1–2 % of the Sahara area would be sufficient to meet the entire carbon demand of the chemical industry in 2050 by means of photovoltaics and CO2-utilisation!

Chemical CO2-conversion to polycarbonates has been known for decades

CO2-based polycarbonates are already commercially available from various suppliers. One of the largest volumes available are aromatic polycarbonates, but several players worldwide are also offering aliphatic polycarbonates such as polypropylene carbonate (PPC) or polyethylene carbonate (PEC) for a large range of applications. The amount of CO2 incorporated can reach up to 50 % by weight for these types of aliphatic polymer! In addition, some companies are focussing on polycarbonate polyols as one component in polyurethanes, which can be used in mattresses, car interior foam or textiles.

Intensive research activities on chemical CO2-conversion for other polymers

As shown by Grignard et al. (2019) and in the nova trend and technology report, different pathways are being studied for the chemical conversion of CO2 to various polymers, such as polyureas, at the academic level. Two different approaches are being reviewed to introduce CO2 onto polymer backbones: CO2 is either used as a comonomer and participates directly in the polymerisation process or it is used for the synthesis of building blocks which can afterwards be involved in a polymerisation process. There is also a research interest in the production of CO2-based polyacrylates for use as superabsorbent polymers.

A lot of improvements have been made in the last years on electrolysers and electrocatalysts for the conversion of CO2 to chemicals and chemical building blocks, which led to increasing interest from key players and the creation of several start-ups in this area. The electrosynthesis of chemicals such as ethylene or monoethylene glycol has been of particular interest because of its potential for the production of polyethylene or polyethylene terephthalate, two main conventional plastics used in high volumes. Chemicals such as methanol, formic acid and other chemical building blocks have also a great potential to be produced via this technology.

Thanks to the use of various microorganisms or cyanobacteria and improvements in microbial engineering, biotechnological conversion of CO2 to polymers has seen tremendous growth in recent years. Several companies and start-ups are focusing only on PHAs synthesis from patented processes and microorganisms, such as Newlight Technologies. Other key players have a larger portfolio and could offer chemicals such as butanol, ethanol, lactic acid and other building blocks. The most advanced technology in this field belongs to the company LanzaTech, which currently has commercial plants for CO2-based ethanol, used for fuel and ethylene synthesis. Finally, some companies and research consortia are working on the combination of electrosynthesis and biotechnology, either in a two steps approach, or by working on electrofermentation.

Finally, CO2-based naphtha will help to broaden the CO2-based polymers portfolio more than ever

And it has already started! Companies working on the Fischer-Tropsch conversion of syngas (a mixture of hydrogen, carbon monoxide and carbon dioxide) to hydrocarbons are already operating pilot plants for the production of diesel, kerosene, wax and naphtha and one commercial plant is being constructed by the company Nordic Blue Crude. CO2-based Naphtha can be used in the already established cracker process to produce olefins which are needed for most plastics currently in use.

The potential market volume of CO2-utilisation is in principle the entire petrochemical market. “Almost all chemical products currently manufactured from fossil raw materials can be produced from carbon dioxide” (Lehtonen et al. 2019). The chemical industry could be built on CO2 as one of its key carbon sources.

However, many technical challenges still need to be overcome to enable the deployment of new CO2-conversion plants on a widespread basis, but the use of CO2 as a chemical feedstock for polymers has been intensively diversified in the last years. By now, there are several successfully implemented technologies on the market or close to the commercialization phase. The third version of the nova-Institutes Technology and Trend Report spans 100 pages and gives a comprehensive overview of the different production routes of CO2-based polymers that are developed and commercialized by research groups of industrial key players, start-ups and institutes. A total of at least 40 companies and research projects from Asia, Europe and North America are working on CO2-based polymers and are presented in this report.

All market, trend and technology studies of nova-Institute are based on latest insights from technology and market experts and thorough research. The third version of the technology and trend report “Carbon Dioxide (CO2) as Chemical Feedstock for Polymers – Technologies, Polymers, Developers and Producers” is now available for € 1,000 – in addition further market studies on various topics on the bio-based and CO2-based economy as well as on recycling can be found at: www.renewable-carbon.eu/publications. 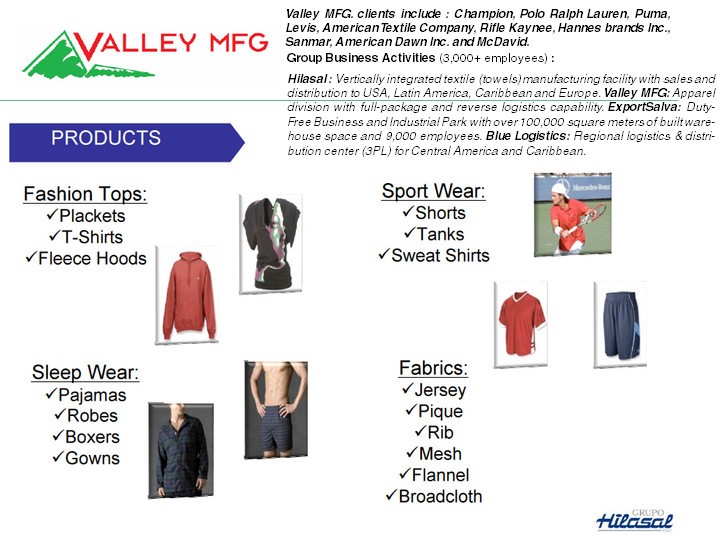 Apparel Contracting in the Western Hemisphere Vs. Asia