“The Indian textile industry needs to stick to its core competence of producing textiles such as yarns and fabrics, in which the country has immense strength, rather than apparels”, said Robin Anson – MD, Textiles Intelligence – UK told fibre2fashion on the sidelines of the International Conference on Manmade Fibre Textiles in Ahmedabad. 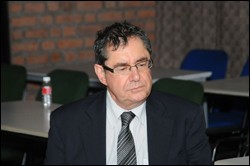 Mr. Robin Anson said : “It will be very difficult to compete with low-cost countries such as Bangladesh and Vietnam which have also developed core competencies in the production of clothing for exports. On the other hand, the Indian textile industry, which is more than a century old, has complete proficiency in the manufacturing of textiles”.

When asked as to how much the global textile scenario had changed since he was last here in Ahmedabad in October 2011, he replied by saying, “Everybody was optimistic after emerging from the economic turmoil of 2008-09. But the developments in the last few months have made most in the textile value-chain pessimistic”. To the likelihood of an economic recession in Europe, he said, “Some countries are having deep economic problems. It is quite possible that in the next 12-18 months, we might revisit the scenario experienced in 2008-09, though not on the same levels.” He added, “The finance ministries of a few countries will have to do a fine-balancing act, as if a bank in a particular country collapses, the impact will be felt in neighbouring European countries, wherever the bank has its network. Also, each country in the European Union is trying to ensure that the Euro zone is not broken, which could have a disastrous impact on all the countries of the region”. “Though economic conditions in the UK have improved from those in 2008-09, the country has a huge budget deficit. However the good news is that the UK government, has a plan in place to contain the deficit”, he informed.

When quizzed about the main reason for cotton textiles consumption being ahead of manmade fibre textiles in India, he said, “India since a long time has been a key producer of cotton. “Secondly there has been a historical focus on preserving the hand loom industry to provide employment in rural areas and this industry is a big consumer of cotton yarn”. “Thirdly, at a time, when there were developments in MMF industry in other countries, duties on MMF textiles were very high in India in the recent past, which made cotton an attractive proposition. “China too has a policy which favours manmade fibre textiles, which assures a reliable source of raw materials for the Chinese MMF textile sector and has helped in creating a holistic growth of the segment. On the other hand the Indian government focused on providing support and protection to the cotton farmers and others in the cotton value-chain”.

To another question as to which major areas the Indian textile and garment industry needs to improve or concentrate in order to keep its place in global export rankings, he answered by saying, “In my opinion, it was a big mistake on the part of the Indian government to put in so much effort to developing the apparel sector. Instead, it should have provided incentives for the textile industry to invest in world class spinning, weaving and finishing machinery”. “Within Asian countries, it will always be difficult to compete against other low-cost countries like Bangladesh and Vietnam. India used to and still has inherent strengths in spinning and weaving sectors. The country should concentrate on exporting yarn and gray or finished fabrics to those countries which have competency in apparel making. “Garments can be produced in any country since it entails low investment and can also be shifted as and when needed, however the same is not possible, in case of spinning units”, he concluded by saying.

Earlier, Mr Anson had told delegates at the conference that, since cotton competes with food crops for the same arable land, there are very few indicators of rise in global cotton output in the future. “At the same time quantum of arable land is also going down. Harvested area of cotton also keeps going up and down, without any noticeable increase in last few years. Considering that cotton value chain consumes a huge amount of water, getting water in the future could prove to be a strain. Polyester is the fibre of the future, but with consumers looking for moisture management and absorbent fabric clothing, cellulose fibre fabrics will be in great demand. The gap between demand and supply for fibres can be filled up, only by manmade textile fibres.