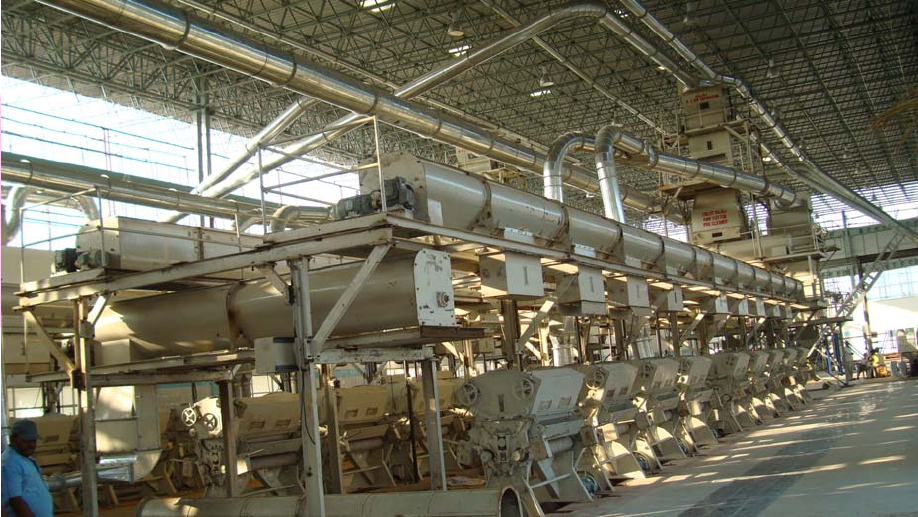 “Ginning, in its strictest sense, refers to the process of separating cotton fibres from the seeds. The cotton gin has as its principal function the conversion of a field crop into a salable commodity. Thus, it is the bridge between cotton production and cotton manufacturing. At one time the sole purpose of cotton gin was to separate fibres from seed. But today’s modern cotton gin is required to do much more. To convert mechanically harvested cotton in to a salable product, Gins of today have to dry and clean the seed cotton, separate the fiber from the seed, further clean the fibres and place the fibres in to an acceptable package for commerce. The Cotton Gin actually produces two products with cash value i.e. the fibre and the cotton seed. Cotton seeds are usually sold to cotton oil mills for conversion into a number of important and valuable products, but in some cases they may be saved for planting purpose. The fibres are the more valuable products, and the design and operation of cotton gins are usually oriented towards fibre production. In essence, the modern cotton gin enhances the value of the cotton by separating the fibre from seed and by removing objectionable foreign matter, while preserving as nearly as possible the inherent qualities of the fibre.”

In view of above ginning technologies have become of great importance to produce good quality fibre and to get better returns in the cotton trade.

The ginning industry has been on a modernization spree ever since the Government of India launched Technology Mission on Cotton. It is reported that as many as 860 ginning & pressing factories have completed modernization out of 1000 projects approved by Technology Mission on Cotton during its implementation. It is also reported that about 500 ginning & pressing factories are being modernized under Technology Up-gradation Fund Scheme. With these developments, ginning infrastructure in the country seems to be well on its way to secure a firm foundation. The cotton textile industry in India can look forward to meet its major raw material requirements through indigenous supply of clean cotton.

Recognizing the importance and demand for rating, Government of India proposed for the formulation of an Assessment and Rating Scheme for ginning & pressing factories and entrusted the task to Textiles committee. Textiles Committee developed a star rating scheme in association with TMC and launched the scheme in February 2009.

The Scheme developed by Textiles Committee proposed to classify ginning & pressing factories into different classes through a rating methodology based on the assessment of quality of infrastructure comprising machinery & civil structural items, the management practices followed by the factory and contamination level in ginned cotton. Since the quality of cotton processed in a ginnery will greatly depend on the excellence of its infrastructure and management practices, the rating assigned to a unit will be a performance indicator that will be of concern and interest to both the cotton trade and textile mills alike.

Initially, Textiles Committee developed a three tier rating scheme (Single Star to Three Star), in consultation with TMC. The rating scheme being a unique one and first of its kind, consultative meets were held with CCI and the representatives of the ginning & pressing factories to review the scheme. Based on the feedback & suggestions given by the Trade & Industry and to recognize & differentiate the factories having ultra-modern / most-modern facilities from other modernized factories, the scheme was modified into a five tier rating system (Single Star to Five Star).

What is Assessment & Rating Scheme

Rating is the process of placing modernized ginning & pressing units into classes based on the quality of infrastructure comprising (i) machinery, (ii) civil structural items & (iii) management practices including contamination level in ginned cotton. Since the quality of cotton processed in a ginnery will greatly depend on the excellence of its infrastructure, the rating assigned to a unit will be a performance indicator that will be of concern and interest to both the cotton trade and textile mills alike.

Rating of ginning & pressing units will help mills in selecting the appropriate ginnery for sourcing their cotton. Where the mill’s requirement of cotton quality is stringent, a ginnery of high rating could be chosen. The mills desiring to undertake their own ginning can choose the factories of desired rating.

For the cotton trader / ginner, the rating will serve as an effective marketing tool. Higher premium could be demanded for cotton processed by ginneries with superior rating. The rating indeed will boost the credibility of the factory both in domestic and overseas markets. A ginner carrying out job work can demand higher rates depending on the rating secured by the factory.

Cotton traders can select ginneries for processing their cotton on the basis of rating. Since the quality of cotton processed is bound to depend on the rating of the factory, traders will find it easy to choose the ginnery for processing cotton to the level of quality demanded by each mill.

Benefit to the Government of India

Modernization of ginneries and the resulting quality up-gradation of Indian cotton have favoured unprecedented rise in cotton exports of more than ten-fold in a decade. Periodic assessment of rating may act as an incentive not only for maintaining the modernized ginning infrastructure but also for its further up-gradation. A spirit of competition would be generated among the ginning & pressing factories whereby the objective of sustained improvement in ginning infrastructure in the country will be fully realized.

Portugal: The recovery of the textile and clothing sector is slow, with diverse impacts in terms of sub-sectors

Marzoli relocating its assembly line in India from Hosur to Coimbatore