Kuwait Textile Arts Association (KTAA) celebrated the tradition of bisht in their monthly meeting in February, just a few days before the National Day and Liberation Day commemorations in Kuwait. The event took place in Sadu House, the graceful old heritage building on Gulf Road, the home of ‘sadu’ and an apt backdrop to the heritage craft of bisht-making. On Feb 19, at 6:30 pm. Linda Fouke, President of KTAA and members of her committee welcomed a full house to an event packed with information, history, anecdotes, demonstrations and to top it all gifts as books written by the presenter himself. 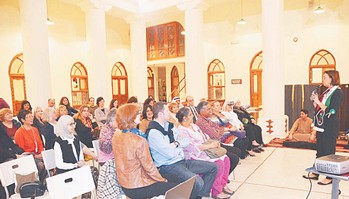 The speaker for the evening was Reyadh Al Baghli, an old associate of KTAA who spoke of ‘The Bisht: The Traditional Men’s Cloak of the Gulf’. Al Baghli belongs to a family that has kept alive the heritage craft of bisht making in Kuwait against odds that include decreasing number of skilled craftsmen and resources and an increasing westernization of culture. 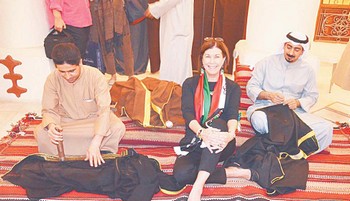 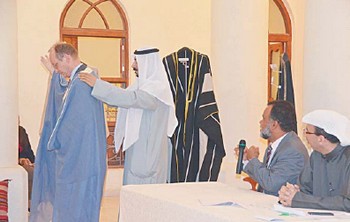 According to the KTAA, the Al Baghlis can trace their roots to a famous oasis in Saudi Arabia called Al Ahsa, which incidentally has been home to the best bisht tailors for over 200 years. The story of urbanization is Kuwait is closely linked to migration and like many others the Al Baghlis migrated to Kuwait in the 18th century carrying with them the tricks of their trade and set up home and business in Kuwait.

“As a family, we have been into bisht-making for the last 150 years,” recalled Reyad Al Baghli. “At first we setup shop in the merchant’s market and then shifted to what is known as the bisht market in 1939.” The Al Baghli family established a factory for making bishts which is considered the oldest factory in Kuwait.

Increasing modernization led to a decline in the number of skilled weavers, but Al Baghli’s grandfather was determined to keep the craft alive. And years later his son and grandson continue the tradition successfully.

The story of traditional costumes in the Middle East is an ancient one, though for most part it is undocumented. “Although Reyad Al Baghli said that historically the tradition dates back to a thousand years, I believe it goes back more than 2000 years,” observed Dr Ali Al Najdeyah, a tutor of Interior Design at Kuwait University, master weaver and consultant to Sadu House and the official translator for the evening. “There is evidence of Arabs wearing bishts both in the desert and cities. I have seen movies in which Jesus and Moses are shown dressed in bishts, albeit their bishts are different from the ones here.” 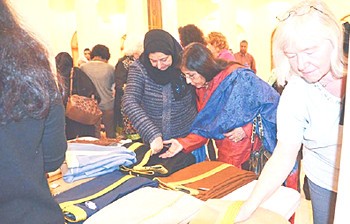 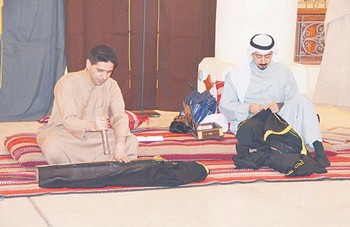 In his well-structured presentation Reyadh Al Baghli touched upon the tradition, types, colours, ways to wear, styles of stitching and sewing and the use of zari. Al Baghli’s presentation also included some very interesting images, a workstation with craftsmen displaying their work and a live demonstration of the way to wear and fold a bisht.

Throughout the ages outdoor Arab male costume is considered complete only when a bisht or an outer mantle is added. The bisht is same in concept to the abaya worn by women and differs only in textile, colour and embellishment and in the way it is worn. While women drape the abaya from the centre of their crown, men wear the bisht cloak fashion on their shoulder.

Worn over thoubes, bishts are traditionally made of camel hair, wool, and cotton though today’s modern versions are also made of lightweight sheer voile. The colours of the bisht depend on the occasion and time of the day, but they range from white, beige, and cream to the darker shades of brown, grey and black. “The bisht was an important item of the men’s apparel. People from different income groups would own bishts, depending on their social status and purchasing power.

Now, there are two types of bishts depending on whether the occasion is casual or formal. Then there is the summer bisht and the winter bisht,” said Al Baghli.The light coloured bisht or the ‘darboia bisht’ is worn during the day and the darker ones are reserved for the evening. Interestingly black is recommended for celebrations and formal occasions. 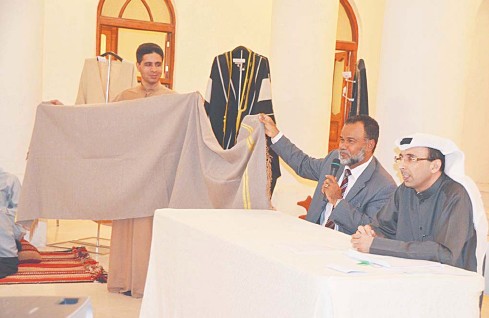 “The summer bisht is often made of thin sheer where the weft and warp are apart and therefore loose and thin.” In the past bishts were worn often, but now they are reserved for special occasions.

Traditionally, the bisht has two sleeves but it can be worn with only one arm through the sleeve and the other wrapped around loosely and tucked into the side.

Three types of embroidery are used in making the bisht which include the gold stitch, silver stitch and silk stitch. The thread used to make these beautiful embellishments is called ‘zari’ Black bishts with gold trimming is the most popular. The metal threadwork is secured with a yellow thread to form a band around the neckline bending in two small decorative tassled tie cords.

There is also a gold soutache trimming along the shoulder line and around the hand openings. With time, innovations have been introduced. Al Baghli showed custom-made bishts in different colours including one made in the colours of Kuwait’s flag. “During my daughter’s wedding, I got a bisht stitched to match the colour of my wife’s outfit,” he smiled.

Nowadays the number of bisht makers is less than 20 in Kuwait. Although important personages, including the Amir, scholars, and ministers wear the bisht often, yet the tradition of wearing the bisht is slowly going down. “We should try different ways to increase its longevity. One way could be to make bishts mandatory for students at graduation ceremonies in Kuwait,” said Al Baghli. Bishts are available in different price ranges depending on the material and the tailoring. 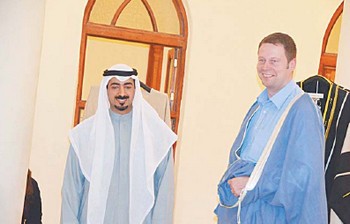 For centuries this long flowing robe has endowed respectability and dignity on the wearer. It is said that no other garment in the Middle East can provide the same elegance and one can only hope that this tradition continues for a long time to come. (Courtesy : Arab Times)