2nd Anniversary of Rana Plaza Collapse : A lot remains to be done 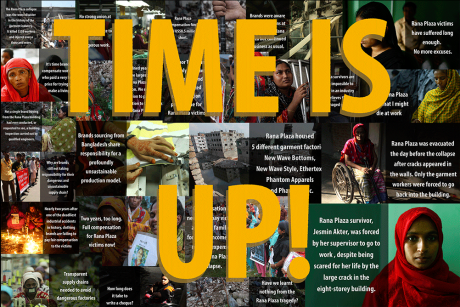 Reproduced from IndustriALL Global Union IndustriALL Global Union represents 50 million workers in 140 countries in the mining, energy and manufacturing sectors and is a force in global solidarity taking up the fight for better working conditions and trade union rights around the world. IndustriALL challenges the power of multinational companies and negotiates with them on a global level. IndustriALL fights for another model of globalization and a new economic and social model that puts people first, based on democracy and social justice.

Rana Plaza two years on: progress but no hiding from massive task ahead

On 24 April it will be two years since the Rana Plaza collapsed, killing more than 1,100 workers and injuring thousands more. The labour movement and its NGO partners are calling on the garment industry to show that it has the leadership to staying the course and changing the global supply chain permanently.

The compensation fund is still missing US$6 million out of the targeted US$30 million needed to compensate the victims and it is an unacceptable reality that not a single factory can yet be called 100 per cent safe.

Global union leaders are calling on the industry to show that it has courage and leadership to turn this page and move on.

“Two years after this industrial homicide, the victims of Rana Plaza are still waiting for full compensation. This is a collective responsibility, but we specifically call upon brands like Benetton, Mango, Walmart and Carrefour to contribute more.

The global garment industry needs to show to its consumers that it has learned its lesson and is able to move on to addressing another burning question, the poverty wages paid to workers.

The unions say they will use every tool within the legal binding Bangladesh Accord to ensure that the brands and factory owners fix the factories.

Important progress has been made, but the fact that all remediation is currently behind schedule, some over six months behind, is a serious problem.

“It’s outrageous that families who lost their mothers and breadwinners have still not been fully compensated because a group of multinationals cannot find it in their hearts or deep pockets to pay the US$6 million missing from the compensation fund. All brands need to join forces to end the funding crisis by closing the funding gap and stepping up the remedial work on factories.”

The legally binding Bangladesh Accord on Fire and Building Safety was negotiated by IndustriALL, UNI and its NGO partners with the brands after the Rana Plaza collapse.  The Accord now has more than 200 brands signed up and has to date completed nearly 1,500 factory inspections and identified many thousands of safety issues to be remedied.

Minimal Waste: Reintegrate waste back into the economy