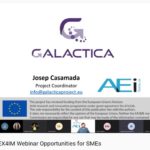 The AEI TEXTILS , the cluster of textile materials advanced of Catalonia, participated in the webinar Opportunities for SME s, held on 16 March.

This webinar was part of the matchmaking organized by TEX4IM (from March 10 to 17), in parallel to the Modtissimo fair , which usually takes place in Porto and which this year was held in virtual format on the 10th, 11th and 12th of March.

Josep Casamada , project manager at AEI Tèxtils , presented the Galactica project , led by the cluster. Galactica aims to support the creation of new industrial value chains in the textile and aeronautical / aerospace sectors based on advanced manufacturing. On the same day, March 16, the project opened its first call for aid, with a budget of 1.2 million euros to support SMEs.

The AEI TEXTILS , aiming to strengthen ties with its international partners, joined in early 2020 to the consortium agreement of the project TEX4IM , a sectoral group for strategic investment into smart specialization in Europe, led by NTT.

Sustainability thanks to in-house laundries