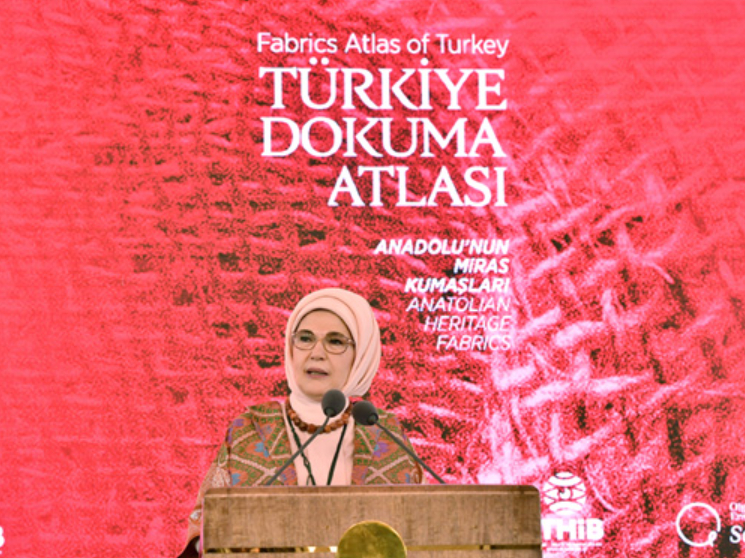 Speaking at the opening ceremony, First Lady Emine Erdoğan, the wife of President Recep Tayyip Erdoğan, said that they came together to add new kilometers to Anatolia’s weaving journey that started seven thousand years ago and said, “This project is the herald that our weaving art will continue on its way without losing its place in our memories.” she said.

The “Weaving Atlas Exhibition”, which was prepared within the scope of the “Turkey Weaving Atlas” project, and which was carried out under the auspices of Emine Erdoğan, brought together Turkey’s local weavings for the first time. 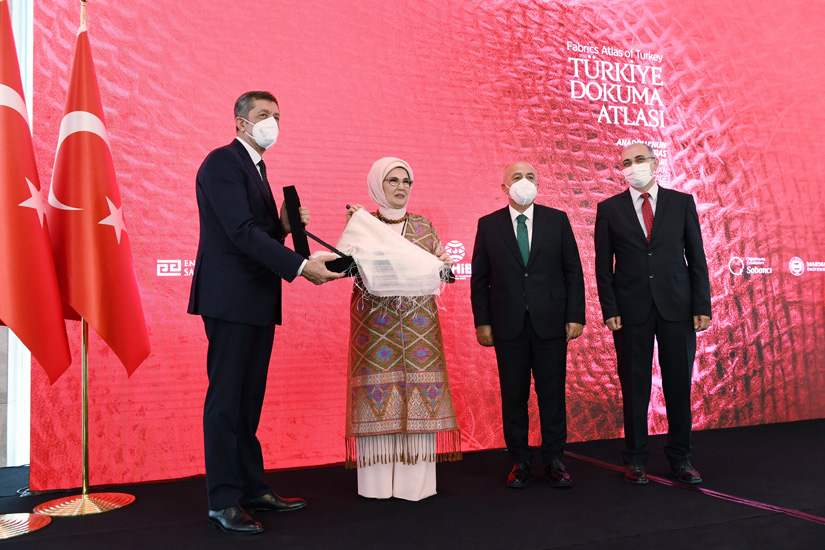 Expressing that weaving is the companion of human life and that all the turning points of life gain meaning with weaving, First Lady Erdoğan said: “Weaving does not consist only of threads and patterns, the Turkish weaving carries deep traces of the adventure of the nation. Weavings that became famous in the Seljuk and Ottoman periods were known as “Turkish Fabric” in the world,” she added.

Pointing out that there are dozens of weaving types that have been mentioned in the literature, especially the “Ankara Sof”, First Lady Erdoğan said: “All these values ​​have a route drawn on our geography. There are many stops where we meet with my taste, such as the cotton rope of the Mediterranean, the wool of the Eastern Anatolia, the silk of Bursa, the flax of the Black Sea, and the bulgur of Denizli. These wonders will come to light again on the occasion of this project. The fact that our traditional arts are not a lost treasure depends on our keeping in mind. We need to keep them alive so that they do not interfere with fairy tales that once started. “No matter how much the world changes, tradition, art, craft and local production must always survive. Therefore, I find it extremely valuable that the Turkish Weaving Atlas Project comes to life.”

“Trends and tastes are changing at the speed of light” 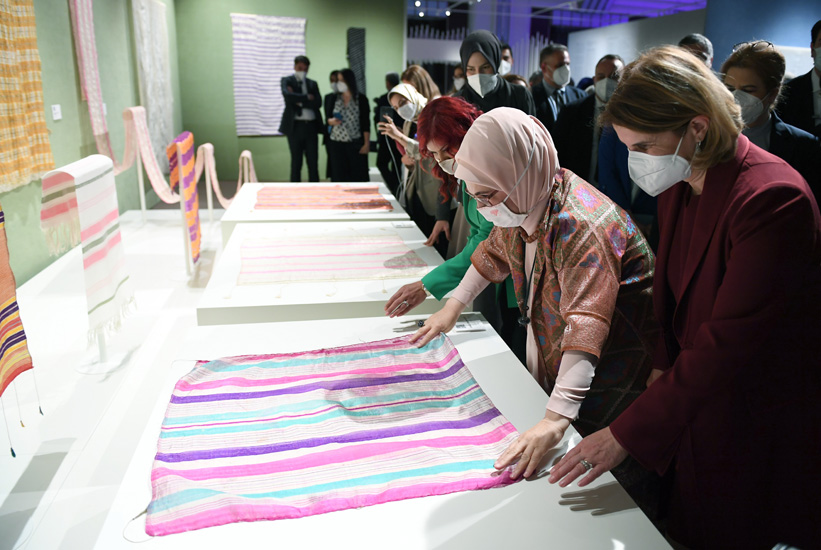 Expressing her gratitude to those who contributed to the project, First Lady Erdoğan said: “Within the scope of the project, weavings from seven regions of our country were identified and identified, and a very meticulous study was carried out. Now, the textile and fashion world can embark on inspiring journeys on this route drawn by the Weaving Atlas.” Emphasizing the importance of culture and cultural heritage, First Lady Erdoğan underlined that Turkish weaving is one of the most outstanding parts of cultural heritage. 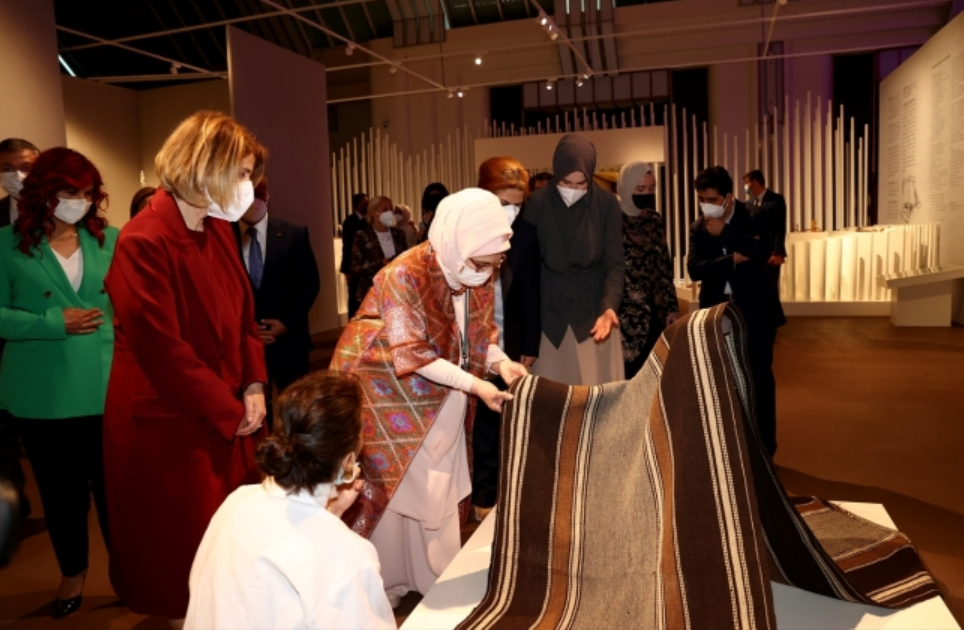 Expressing the importance of transferring this local wealth to the universal level, Erdoğan said: “Traditional arts are very difficult to find a branch to hold on to in modern times. Trends and tastes change at the speed of light. But I believe that if we can adapt traditional arts to our day, we can keep them alive. But while doing this, let’s not commercialize them without understanding the spirit of traditional arts. “We see that it is used as a commodity in textile and fashion. However, it is quite possible to bring traditional arts together with modern designs by staying true to their essence. This is the vision of our Turkey Weaving Atlas Project.”

Stating that the textile industry is among the sectors that have the most negative impact on the environment on a global scale, First Lady Erdoğan said, “Unfortunately, 85 percent of the textile products produced every year go to waste. In other words, a truckload of clothing is either burned or thrown into landfills every 1 second.” she said.

Stating that besides the intense water consumption, there are other pressures created by the textile industry on the ecosystem, First Lady Erdoğan emphasized that a nature-friendly process is seen in traditional production, from natural fiber to dyeing techniques.

“We can achieve a lot if we work together” 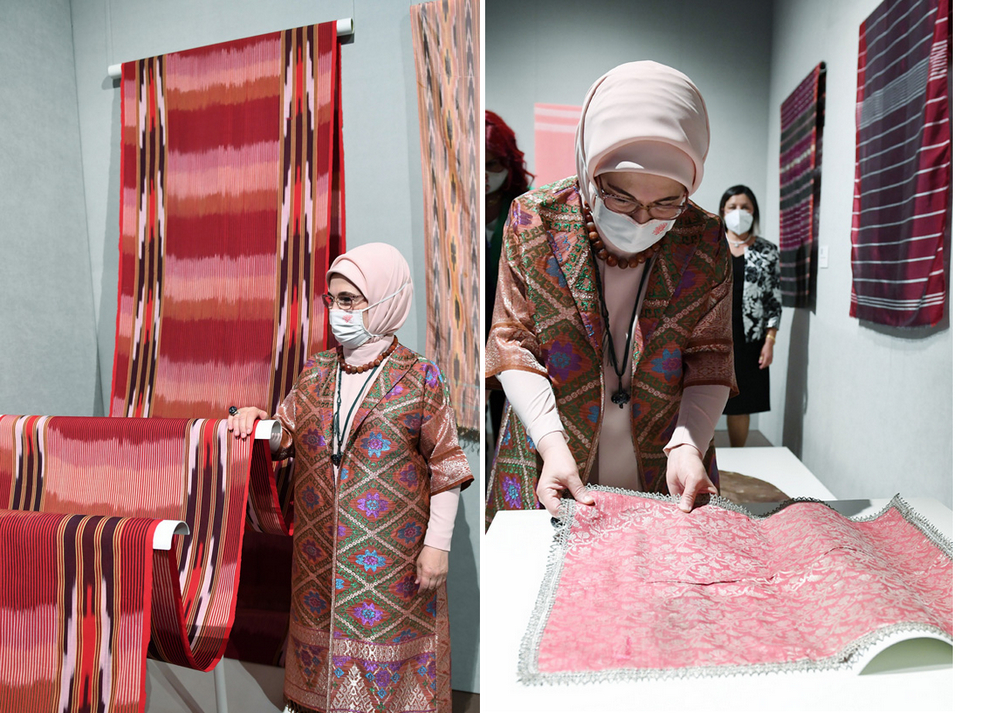 Explaining that while the waste culture continues in the world textile sector, a new consciousness has emerged on the other hand, First Lady Erdoğan said: “People’s demands for organic, nature-friendly and sustainable clothing are growing like an avalanche. We can present the nature-friendly features of our traditional weaving culture to the attention of the world. As you know, our country is an extremely strong actor in the textile industry. Turkey’s textile power helps the clothing culture gain new values ​​globally. “People all over the world are trying to feed off a sterile global design pool. The value of the authentic has been lost. At this point, I believe that Turkish weaving and our highly talented designers will provide a new opening.” 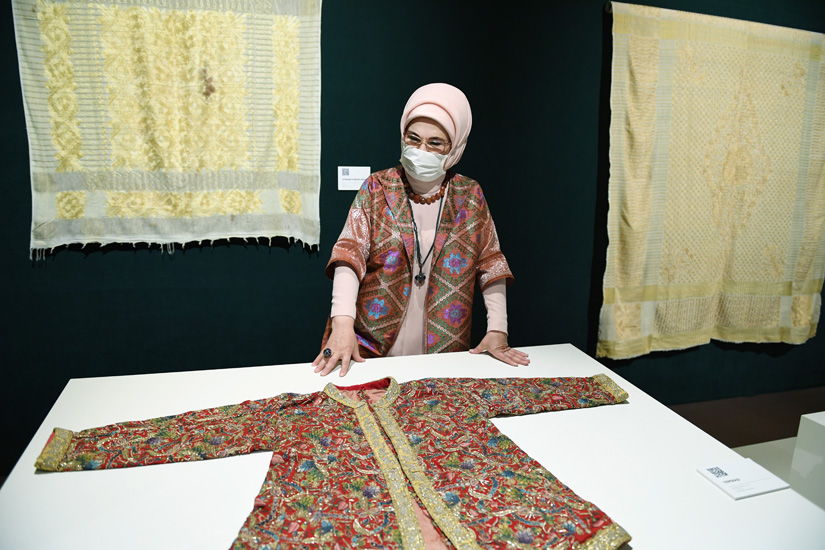 Pointing out that one of the 6 cultural values ​​presented to the UNESCO Intangible Cultural Heritage lists by the Ministry of Culture and Tourism this year is “Silk Insect Breeding and Silk Weaving Culture” , Erdoğan said , “I believe that such efforts will further increase the recognition of our culture in the international arena. Hand in hand. “I would like to express my gratitude to the Ministry of National Education and Trade, the umbrella institutions of the project. I wish that the exhibition that we will open today will be a new milestone in the revival of our cultural values. I wish the project to be successful in the future as well.” she said.

“We want to see these textures in our children’s memory”

Minister Selçuk said, “This leadership is very valuable for all of us, because you transform many savings and values ​​that are in libraries, articles, workshops somewhere, somewhere in offices, and show the joy of ‘let’s do it together’ into an ecosystem. When all of these come together, you pave the way for a higher value that allows for a very, very great value to emerge.” said.

Ziya Selçuk stated that everyone in the hall deserves a big thank you.

Stating that the Ministry of National Education sees education not only as a matter of acquisition in the curricula, but as “a stage of life, a child’s journey from humanity to humanity”, Selçuk continued his words as follows:

“That’s why we think that everything that has the value of our climate and our culture should take a higher and higher place in our memory, culture and value scale. A girl’s hair braid, a 1000-year-old rug, a 2,000-year-old olive tree.” All the embroidery, all the textures we see on the fabric actually tell us a much bigger story.

This Anatolian story is the most important thing in helping us to create greater stories as the sons of a nation that has heard hundreds of cultures, thousands of crafts, thousands of stories from the Yellow River Valley and breathed thousands of years of wisdom, knowledge and wisdom in the heart of Anatolia. We have not the slightest doubt. Since we have an ecosystem understanding in this regard, we have a lot of work to do with cooperation, cooperation and heart.

All parties here are actually on one side, Turkey’s side is the side of this land, the side of this civilization, so we are strong and we will be even stronger. We want to see these tissues in our children’s memory, embroider, stitch by stitch. For this, we are determined to carry out whatever task falls on us with a great sense of responsibility.” 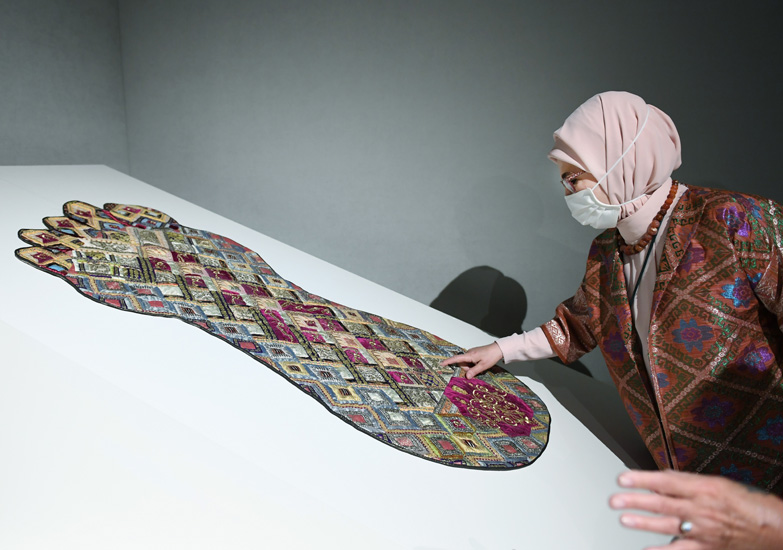 Minister of National Education Ziya Selçuk stated that it is aimed to create synergy by combining the works carried out in the articles, libraries, universities and workshops with the Turkish Weaving Atlas and said, “I trust the gleam in the eyes of all our friends so that the next process will go much faster.” he said.

Selçuk thanked the General Manager of Lifelong Learning Yusuf Büyük and the employees of the general directorate for their efforts in establishing the “Bohça” brand and continuing the process, and for their contribution to this project.

After the speeches, First Lady Erdoğan visited the Atlas of Turkey Weaving Exhibition with the participants and received information about weaving from the exhibition curator Güneş Güner. 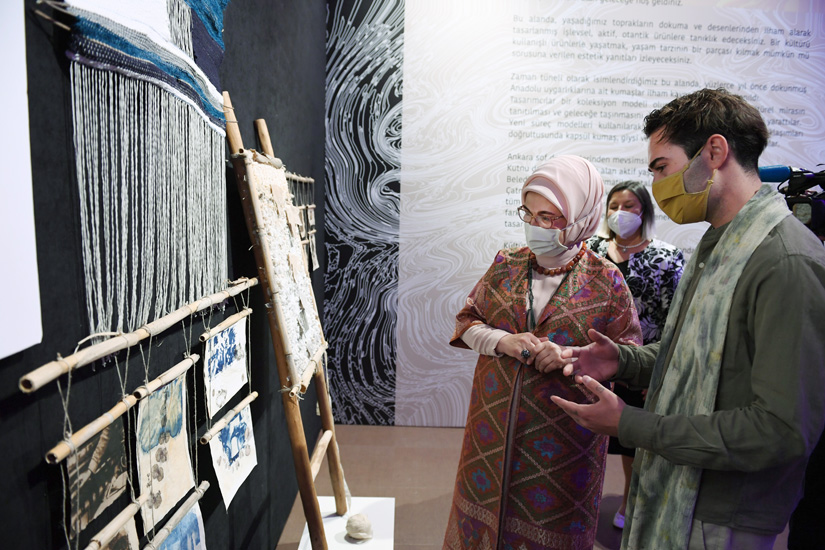 The opening of the exhibition, in which the promotional film about the Weaving Atlas Project was also screened, was attended by the Minister of Family and Social Services Derya Yanık, the President of the Union of Municipalities of Turkey and the Mayor of Gaziantep Fatma Şahin, the President of TİKAD Nilüfer Bulut and Demet Sabancı Çetindoğan with business people including Günseli. Artists and designers such as Kato, Suzan Toptansoy, Banu Yentur, Gönül Paksoy, Nedret Taciroğlu and some academics attended. 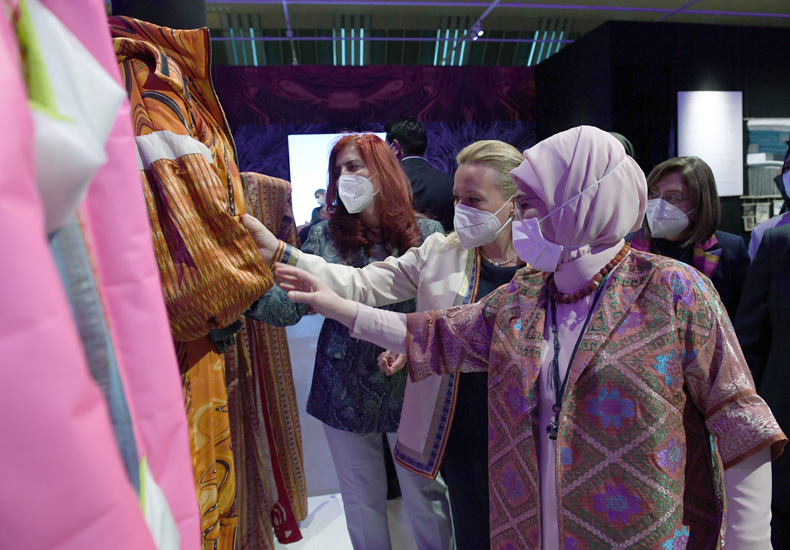 The “Turkish Weaving Atlas Project”, which was prepared as a product of the renewal efforts of the Maturation Institutes, is carried out by the Istanbul Sabancı Beylerbeyi Maturation Institute, which is affiliated to the Ministry of National Education’s General Directorate of Lifelong Learning.

The Turkish Exporters Assembly and the Ministry of Commerce also contribute to the project, which is carried out with the support of the Istanbul Textile and Raw Materials Exporters’ Association and the contributions of Marmara University .

The consultancy of the exhibition, which was held as the first event of the project, was Prof. Dr. Hülya Tezcan, Prof. Dr. Aydın Uğurlu and Prof. Dr. Mehmet Akalın, coordinator Ayşe Dizman, curator Güneş Güner. 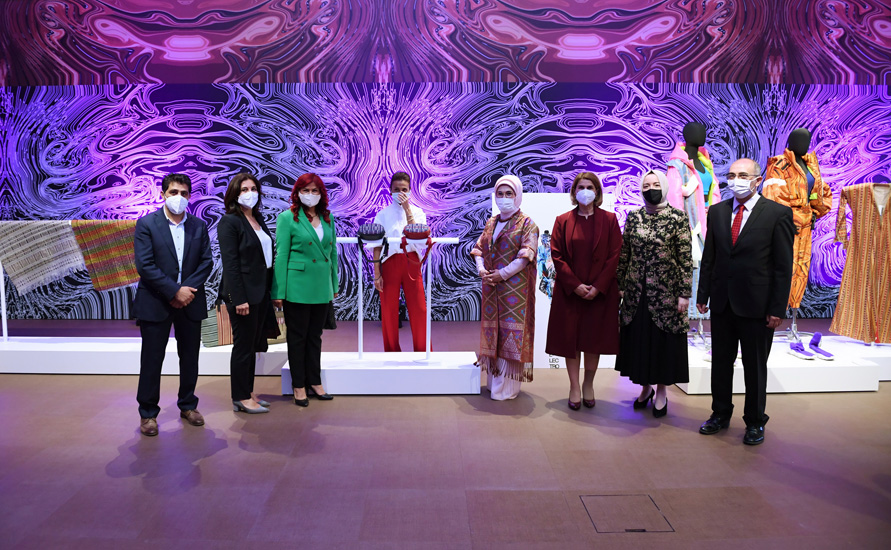 The exhibition includes 151 types of weaving, brought together from various regions of Turkey, following regional routes. There are also pieces of Ottoman fabrics in the collection of the collector Yusuf Iyilik.

The designs of Mehmet Demir, Mert Çelebi, Senem Kula and Rümeysa Kış that can carry traditional weavings to the future are also exhibited in the area of ​​the exhibition, which is called the time tunnel.

Within the scope of the exhibition, panels under the titles of “Evaluation of Traditional and Local Weavings from Different Perspectives”, “Keeping A Culture Alive, Weaving Craft and Geographical Indications”, “Hand in Hand in Turkish Weaving” will be held.

The “Fabrics Atlas Exhibition”, which was opened on June 22, will be on view (6 days a week) at the exhibition hall in the Presidential Complex until September 22, 2021. 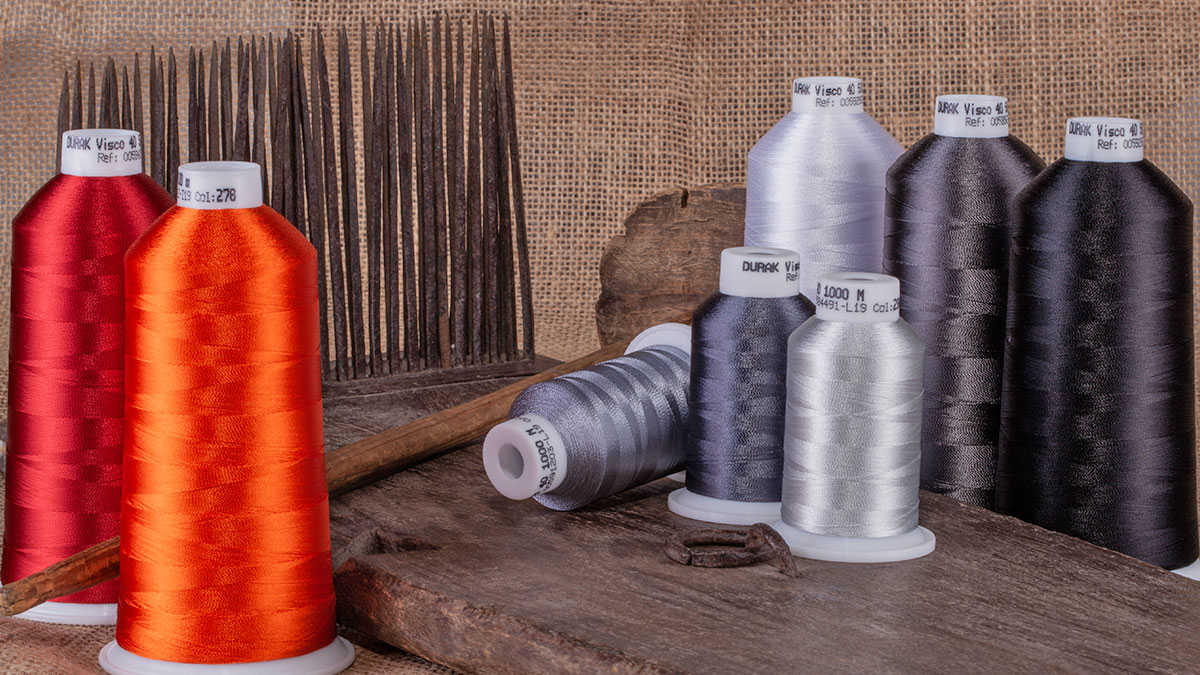 Durak Tekstil is Growing in Global Market with Solid Step