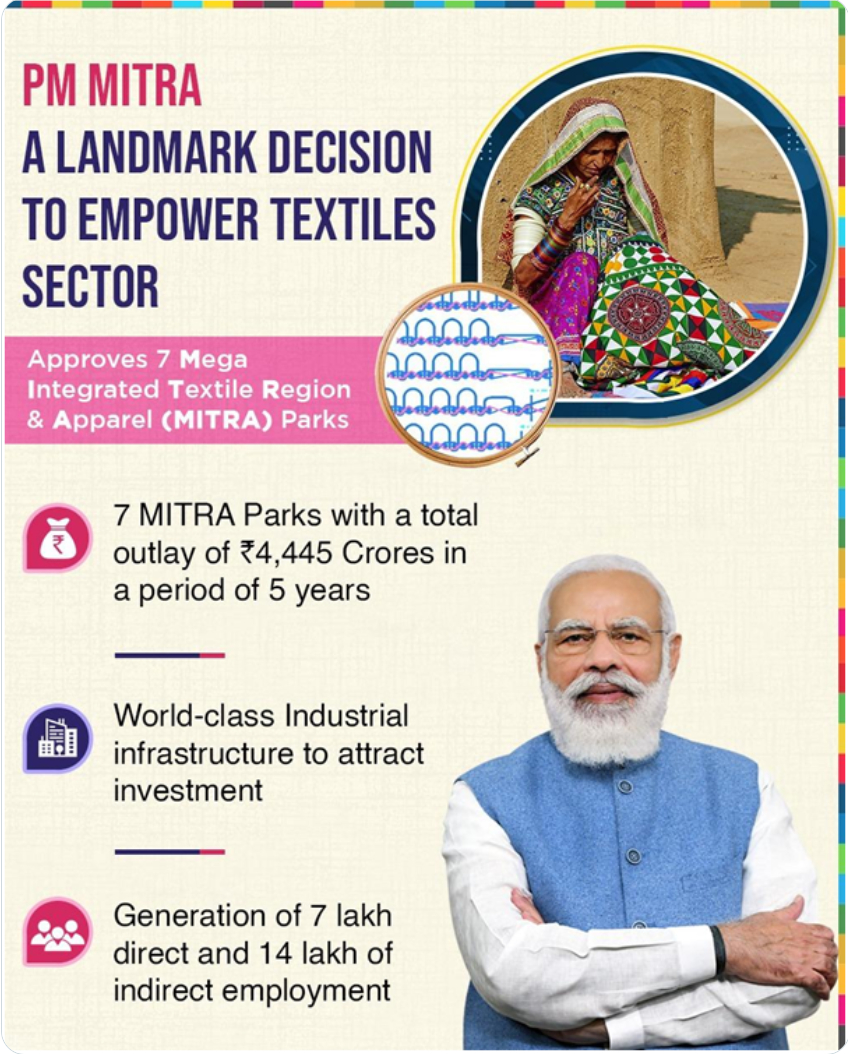 The Indian textiles & clothing industry, the second largest employment provider next only to agriculture, could not achieve the envisaged growth mainly due to scale of operation. The Government has been historically announcing several schemes to support the MSMEs. Certain State Governments in their textile and industrial policies started encouraging scale of operation in the recent years. Competing countries like China, Bangladesh, Vietnam, etc., encouraged scale of operation and could meet the demands of global brands and thereby achieved the phenomenal growth pushing back India from the second position to sixth position in the recent years in terms of global textile trade. The industry has been pleading the Government to announce a unique scheme for encouraging scale of operation in textile industry. The Government had earlier announced Mega Integrated Textile Region and Apparel Parks (MITRA) in the Union Budget 2021.

The Cabinet Committee has now approved seven PM-MITRA Mega Textile Parks with a total outlay of Rs.4445 crores for a period of five years. The scheme is inspired by the 5F vision of the Hon’ble Prime Minister viz., Farm to Fibre to Factory to Fashion to Foreign. The scheme provides an opportunity to create an integrated textile value chain in a single location with large scale investments. The minimum land area specified for the park is 1000 acres for the development of world-class industrial estate with plug and play facilities.

In a Press Release issued here today, Mr. Ravi Sam, Chairman, The Southern India Mills’ Association (SIMA) has highly appreciated and thanked the Hon’ble Prime Minister, Shri Narendra Modi, Union Cabinet and Hon’ble Minister of Textiles, Commerce & Industry, Shri Piyush Goyal for approving the scheme and earmarking huge funds not only for common infrastructure facilities, but also for the production units to gain competitiveness at the initial stage. Mr.Ravi Sam has stated that 30% of the project cost with a cap of Rs.500 crores per park for green field projects and Rs.200 crores for brownfield projects would enable promotion of world-class textile parks with large scale manufacturing facilities. He has stated that the competitiveness incentive support upto 3% on turnover will greatly help the new projects to breakeven and gain global competitiveness from the first year.

SIMA Chief has stated that the Government has announced numerous unique schemes like extension of RoSCTL for three years, RoDTEP scheme covering yarns, fabrics and other products, Production Linked Incentive Scheme extending turnover based incentive from 7% to 15% for MMF fabrics, garments and technical textiles, etc., apart from addressing perennial raw material structural issues like the removal of anti-dumping duty on PTA, Acrylic Fibre, Viscose Staple Fibre and the rejection of ADD on PSF etc., to enhance the global competitiveness of the Indian textiles & clothing industry. The significant relaxation in the MSME eligibility criteria has greatly benefited the T & C industry. Under these circumstances, MITRA park scheme approved today offers sizable incentives for workers housing, testing facilities, incubation centres, R & D facilities, training infrastructure facilities, medical facilities, utilities including power & water, ETP, ZLD, logistics with ICD / bonded warehousing, dedicated public transport from the park to the nearest town city. He has said that such facilities for a park are first of its kind in the history.

SIMA Chairman has stated that out of seven parks being envisaged by the Central Government, four Southern States viz., Tamilnadu, Karnataka, Andhra Pradesh and Telangana have evinced for promoting four parks, one in each State. He said that the Association would closely work with the State Governments and the Central Government and facilitate the existing large textile units in the country to bring huge investments in these parks. He has said that Telangana State might take advantage of the scheme immediately under brownfield category for the Warangal park. He has added that Government of Tamilnadu has already identified the location for the MITRA park. He has urged the Governments of Andhra Pradesh and Karnataka also to expedite the identification of locations for the MITRA park.

SIMA Chairman has appealed to the large scale units located in South India and also other States to approach SIMA Secretariat for any assistance in planning their investments under the MITRA park scheme.