The Union Minister of Textiles Dr. K Sambasiva Rao recently inaugurated the New Bhopal Textile Mills of National Textile Corporation (NTC) in Bhopal. The mill was taken for revival and modernisation along with BurhanpurTapti Mills in Burhanpur. Speaking on the occasion, Dr. Rao said that “the Government is committed to improve textiles production in the state. Issues of livelihood are integral to the sector as it is the second biggest employment generator in the country after agriculture. I am sure that with the support of the Textiles Ministry, New Bhopal Textile Mills will prove to be a catalyst of industrial development in the region.”As per the approved scheme of Board for Industrial and Financial Reconstruction (BIFR), in the first phase, National Textile Corporation Limited in the year 2008 at a cost of Rs. 26.42 Crores replaced 16,848 spindles and commissioned 25,200 new spindles. This resulted in increase of monthly production from 1800 kilograms per day to 5000 kilograms per day which meant that even after providing Modified Voluntary Retirement Scheme (MVRS) to surplus workers, about 380 workers started getting wages everyday which invariably secured employment for about 600 local families in the long run. 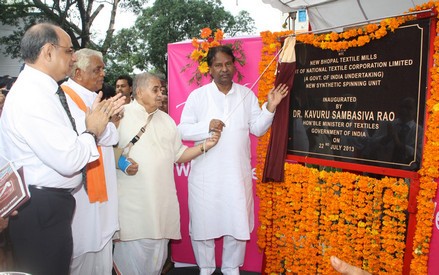 In order to utilise the promise shown by the New Bhopal Textile Mill, its production and the ability of the workers, National Textile Corporation Limited (New Delhi) has approved the second phase of modernisation. In the second phase, the Head Office has approved a sanction of Rs. 81 Crores with which modernised machines would be set up which would increase the production from the present 5000 kilograms per day to 14000 kilograms per day. This would mean that from the current sustenance of 380 workers, the mill will be able to sustain 650 workers every day and with them getting employment invariably it will support 1000 local families and secure employment for them for a long duration of time. This modernisation would lead to a total sale of approx. Rs. 72 crores every year. The mill has obtained ISO Certification.

Under the Nationalisation Act 1974, National Textile Corporation Limited (Madhya Pradesh) took over seven loss making mills. Due to old machinery and high cost of labour, the mill was continuously running into losses and in the year 1992 all these mills got registered under BIFR. Under approved scheme of BIFR, five of these seven mills were closed as unviable units and the remaining two mills i.e. New Bhopal Textile Mills in Bhopal and BurhanpurTapti Mills in Burhanpur were slated for revival and modernisation. As per the scheme all the workers of the five closed mills were given MVRS and the surplus manpower of the remaining two scheduled for revival was also given MVRS benefit and retired.