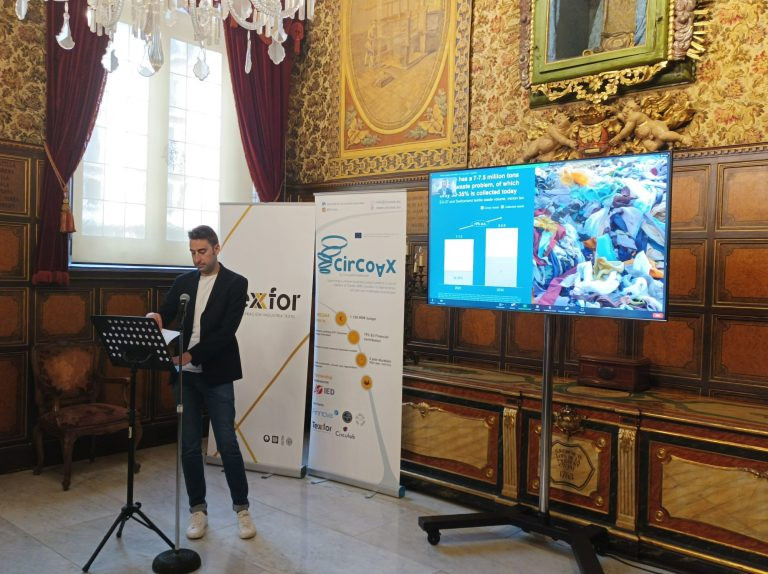 The Casa de la Seda in Barcelona was dressed in sustainable, circular and regenerative fashion and textiles thanks to the participation of cutting-edge projects in the sector. Barcelona hosted the event “Pushing Innovative, Collaborative and Circular Fashion & Textile SMEs in the European Union” organized by the partners of CirCoAX by CircularInnoBooster, a project co-financed by the European Commission under the program for the Competitiveness of Enterprises and Small and Medium -sized Enterprises (COSME). In addition to presenting projects and ideas in this emblematic city of the textile sector, the event promoted synergies among participants.

For the last four months, CirCoAX by CircularInnoBooster, led by the Istituto Europeo di Design and implemented by the Finnova Foundation, Texfor, Circulab, The Circular Project and Human Nation, has been mentoring and financing 30 European consortia, promoting transformative ideas in the second most polluting sector in the world. In this sense, it is essential to give them visibility and networking spaces, demonstrating that there is another fashion aware of the challenge of climate change and decarbonisation. In this context, Natalia Martínez Páramo , Head of Unit of the European Innovation Council and EISMEA of the European Commission, conveyed the message loud and clear at the event “fastfashion is out of fashion.” 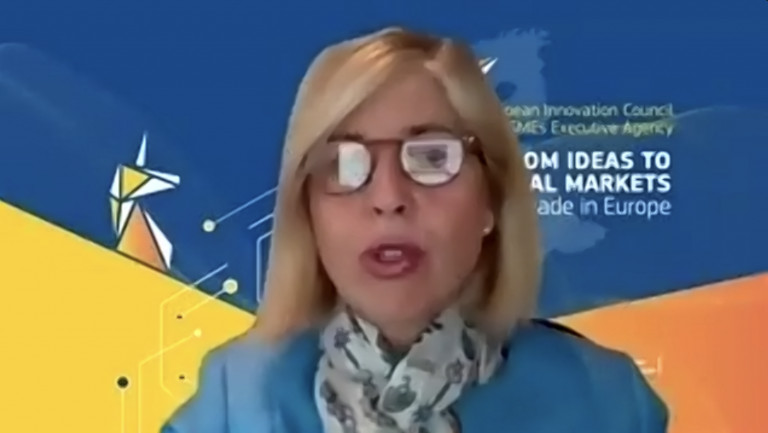 The meeting was attended by international organizations such as UNEP (United Nations Environment Program) and the associations and knowledge management analyst Maëlys Nizan, who explained the good practices promoted by the InTex project. Likewise, the director of business sustainability, Mauro Scalia, from industry loudspeakers at European level such as Euratex, presented one of the most important initiatives in the field of textile recycling called Rehub. To this was added another proposal that transcends the borders of the European Union as Themednew: TEX-MED ALLIANCES, presented by the director of operations of Texfor Mónica Olmos .

During the meeting, some key award and entrepreneurship initiatives were unveiled. On the one hand, thanks to the intervention of Alessandro Miraglia, Head of the MedWaves networking and communication team , the bases of the WeMed Award 2022, awards for startups in the fashion and textile sector in the Mediterranean , were explained. On the other hand, the communication manager for CirCoAX by CircularInnoBooster, Natalia Cediel , presented the Nextextilegeneration Startup Europe Awards 2022, in which the 108 European consortia accelerated by the 4 COSME projects (SmallButPerfect, CirCoAX by CircularInnoBooster, Fashion for Change and S4Fashion).

Avant-garde ideas in fashion and textiles

The most anticipated panel was undoubtedly the entrepreneurship of the 10 main ideas of this commemoration of the international day of micro-small and medium enterprises. Immersing the guests in the textile strategies of the European Union, the coordinator of the CirCoAX by CircularInnoBooster project, David Allo, encouraged all attendees to lead the green, circular and decarbonized transition of the sector. A commitment that FGHR, Pigmentalia, Júlia G Escribà, From the Med, From Trash to Life, Endless Garments, RE-FONTVODDE, Brefashion, Newex and ZWDO already have , whose contributions to this meeting and above all to the planet are fundamental.

With this third round of presentation, the CirCoAX30 are in the hands of the juries to obtain the European recognition of the Nextextile Startup Europe Awards 2022 . These are the European awards promoted by the DG CONNECT of the European Commission and implemented by the Finnova Foundation since 2016.

However, the meetings do not end in the city of Barcelona. During the next 4 months remaining in the CirCoAX by CircularInnoBooster acceleration program, the 30 consortia will meet at multiple events, debating and participating in training and information activities that will allow them to connect with each other. From CirCoAX by CircularInnoBooster they will be supported to achieve their goals and create a circular, green and regenerative entrepreneurial ecosystem for the fashion and textile industry.

Through this program, assistance is offered to SMEs so that they can develop their business models, access financing and internationalize. Likewise, support is offered to public administrations so that they can improve the business environment and facilitate economic growth in the European Union. During the 2014-2020 funding period, this program allocated €2.3 billion to support SMEs.

The Istituto Europeo di Design is an academic institution that operates in the field of education, training and research in the disciplines of design, fashion, visual communication and management. IED has branches in Spain (Madrid and Barcelona), Italy (Milan, Rome and 5 other cities) and Brazil (São Paulo, Rio de Janeiro). It operates in various EU and COSME countries through collaborations and agreements with institutions, business support organisations, teachers, experts and mentors. FDI is based on a wide network of connections in the F&T (Fashion and Textile) sector.

Finnova is a foundation that works for the promotion and development of innovation and entrepreneurship at the EU level. Headquartered in Brussels, it operates through collaborations and partnerships in all the countries of the European Union. Finnova’s experience leading communication activities and dissemination of European projects is combined with a solid proven experience in the creation of companies and business support programs, such as accelerators, incubators and selection and award of ceremonial events.

Texfor is the reference textile association in Spain with 400 members. Founded in November 2010 and based in Catalonia, it brings together companies from the entire textile value chain, from yarns to fabrics, passing through accessories, finishing processes, printing and dyeing for the clothing industry, home textiles and technical / industrial. Texfor has specialization and experience, having worked in important committees of experts at the European Union level: university and professional training, development of financial capacities, transversal collaboration, promotion of R&D&I, specialized services and leadership in sustainability focused on the circular economy.

Circulab is a business design studio and laboratory specializing in the development of transformational methodologies, tools and programs to help companies develop circular and sustainable business models. Circulab has designed a set of tools to implement the circular economy model in companies. It operates in more than 23 countries, 9 of them from the European Union, supporting projects through more than 60 independent business consultants, applying the circular methodology and tools.

About The Circular Project co-designed with HumanNation

TCP (The Circular Project) is a project focused on favoring and promoting sustainable and circular fashion from different fronts, offering the sector a communication strategy with a transversal and systemic approach to the circular economy. At the same time, it integrates social, ethical, environmental and economic aspects. It has a strong presence and connections with the world of sustainable fashion, being the promoter of the Circular Sustainable Fashion Week Madrid, the only catwalk of its kind, and also as the headquarters of the Spanish Association for Sustainability, Innovation and Circularity in Fashion, ambassador de Sannas (Triple Bottom Line Business Association) and collaborator of a wide institutional and industrial network in Spain, Europe and South America.

For this project The Circular Project works with HumanNation for the co-design and development of the project. HumanNation is a consulting firm specialized in the development of transformative and disruptive ecosystems of innovation and business, for the ‘New Economy’, based on the Fourth Economic Sector, systemic thinking and co-creation, promoting awareness in organizations and ecosystems to respect planetary boundaries and the social fabric, creating resilient economies at the local level, with a global perspective.