Germany: Textile care in a crisis. Too little to live, too much to die? 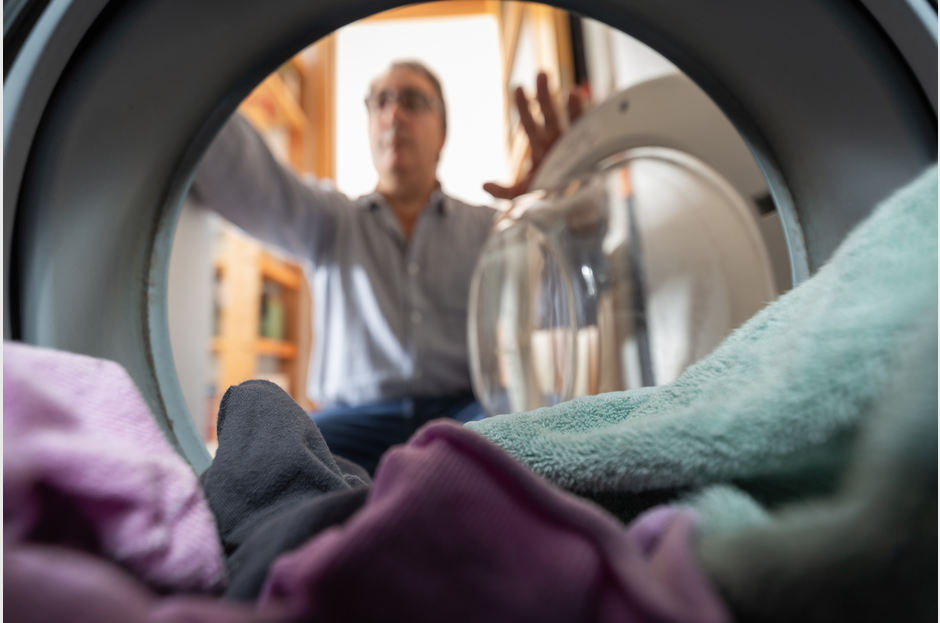 It is a silent cry for help – and yet it speaks volumes: Master textile cleaner Martin Graf has posted an obituary notice for his company. Even if entrepreneurs like him are allowed to continue working, the lockdown affects them. This is exactly what Graf’s ad is supposed to show. How it came about and how the industry and regular customers reacted.

Corona does not affect everyone equally. Especially not economical. Employees fall on the comparatively soft cushion of short-time work, mini-jobbers thunder on the hard soil of unemployment; many self-employed are faced with the ruins of their livelihoods. The lockdown also affects those who do not actually have to close: Dry cleaning companies are allowed to work, but without customers the drums remain empty – and with them the tills.

Dissatisfaction grows. Every second German speaks out in favor of the Corona measures taken and against easing, but this value is falling. At the beginning of January 2021, almost two thirds (65 percent) still endorsed the Federal Government’s measures. According to the poll by the YouGov opinion research institute, 37 percent of those questioned are in favor of extending the previous restrictions beyond February 14 at the beginning of February, 30 percent, on the other hand, call for more relaxation, and 13 percent want a return to normalcy.

To understand statistics, you have to look behind the numbers: there are people behind the values. People like Martin Graf. The entrepreneur has been managing Sauberland textile care in Weilheim, Bavaria, for 21 years . Before the Corona, the dry cleaning master would process 3,500 shirts a month and up to 1,300 items of clothing a day. Eight permanent employees and ten temporary workers worked at two locations. Now he starts the machine twice a week. “With 10 kg of laundry instead of 25,” says Graf. If a lot happens, he and four employees are still in the shop in the afternoon – “a lot” means more than 300 items. The only line of business that is still doing reasonably well is coats and jackets. The family business is doing too well for Corona aid.”Only” just under 27.5 percent of sales were lost. Too little for immediate help. “We’re falling through the cracks,” he says. The entrepreneur feels abandoned. Not because he doesn’t get a cash injection. “Basically, I don’t want them, I’d rather continue working normally.” But because, in his opinion, entrepreneurs like him are not heard.

The number of corona cases is falling, the lockdown continues

The customers stay away, the equity melts. The incidence value falls. Nevertheless, the second lockdown continues – and may even be extended. Graf doesn’t understand. With a distance and mask, restaurants can be opened and events can be held with security concepts. “Why is nothing happening?” This question worries him, rubs him up, makes him angry. Angry with politicians who paralyze the country. Angry because no one is resisting the measures. Angry because there is nothing he can do about it. He made his anger public: Graf posted an obituary notice – for his business. 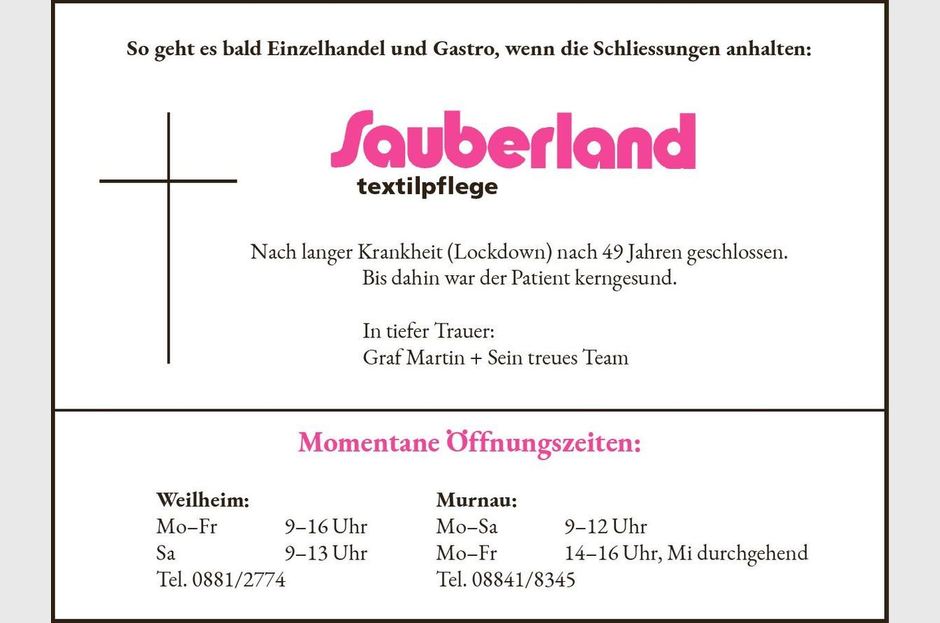 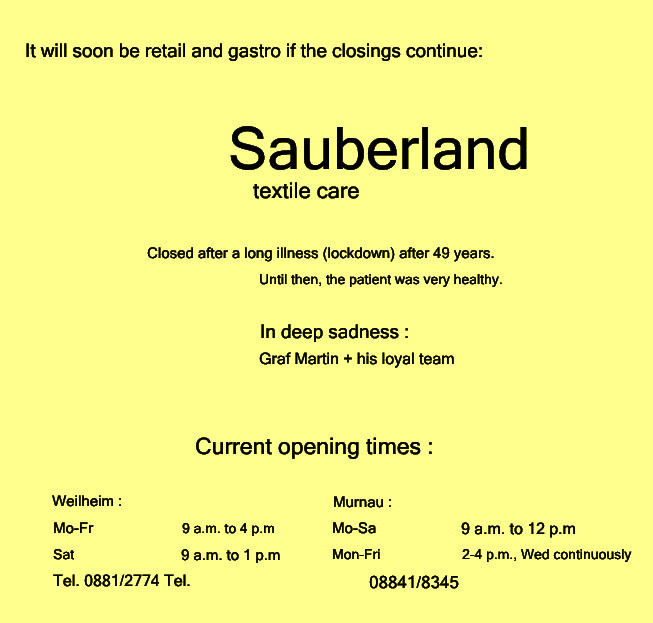 Martin Graf posted this obituary notice in the Weilheimer Tagblatt for his company, Sauberland Textilpflege

“You have to defend yourself somehow,” explains the entrepreneur. In other words, draw attention to the tricky situation. Without events, no laundry – precisely this dependency could break the neck of companies like his. Especially in the second lockdown. During the first closure in March, he tried to cushion the effects and divide his employees so that everyone can come regularly. “You don’t deserve to be rosy,” he says. And that although he is paying a little above the minimum wage. In the meantime he has to look more at himself. “January was terrible.” There was no laundry from Christmas parties.

But it’s not just the financial situation that worries the 52-year-old: “I can’t stand it psychologically anymore.” Professionally and privately. The helplessness drains the substance. “Because you can’t do anything,” says Graf. If he were sick, he could do sports. If he had competition, he could set competitive prices. But he is powerless against the virus. He certainly advocates caution, keep your distance, wear a mask. But understanding is waning. “Every month something different applies.”

The powerlessness to fight back against the pandemic feeds Graf’s anger. “People are comfortable when it doesn’t concern them.” Those who have a secure job in the home office do not understand why the mood in society is changing. But: “People are desperate because they have no work,” he says. He considers comments from politicians to use the lockdown to, for example, install ecological heating as a mockery. “How then? If I have no income at all.” His account has long been in the red. In order to at least save the high overdraft interest, Graf applied for a KfW loan shortly before Christmas. He has not yet received an answer.

Actually he is a fun-loving person. Practice your job with passion and like to ensure a good atmosphere in the company. But laughing, says Graf, has passed since the second lockdown: “It’s no longer life.”

Other entrepreneurs assess their situation in a similarly gloomy manner . According to the Ifo Institute’s business survey, respondents from the service sector in particular are pessimistic about the coming months and assess their situation at the beginning of 2021 to be worse than in December 2020. This is also reflected in the ifo business climate index. If the value falls, this is an indication that the economy is weakening . In January the leading indicator fell to 90.1 points. In December 2020 it was 92.2 points, in January 2020 it was 95.9 points. The new economic survey by the German Chamber of Commerce and Industry also paints a depressing picture(DIHK): Equity is dwindling in more than a quarter of the companies surveyed; every fifth business is struggling with liquidity bottlenecks and 20 percent of restaurateurs expect bankruptcy.

Therefore Graf put the obituary notice for his company 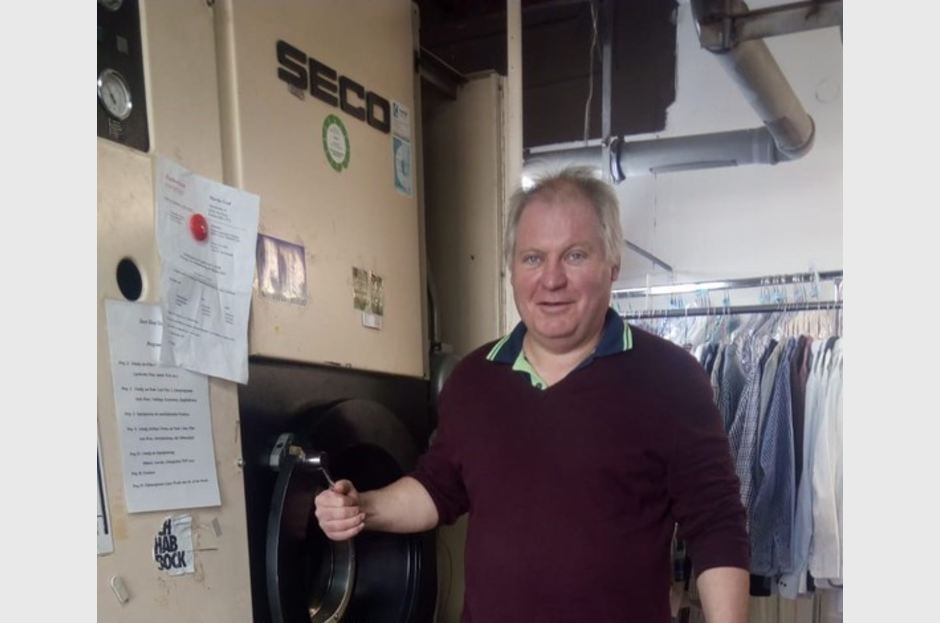 In order to draw attention to the unfortunate situation of Sauberland Textilpflege, owner Martin Graf posted an obituary notice for his company. – Image: Sauberland textile care

Existential fears are difficult to shake off, Graf knows. It is pointed on the button. The entrepreneur is 52 years old. “A second loan is hardly worth it,” he says. He couldn’t pay it off until retirement. If the lockdown lasts longer, he will probably have no choice but to close the family business. “When you get down to business, you feel attacked,” he says.Because of this need he called the newspaper. On January 22nd the obituary was published in the Weilheimer Tagblatt. The first sentence: “This will soon be the case for retail and catering if the closings persist.” The Sauberland textile care logo is emblazoned next to a black cross. Below it says: “Closed after a long illness (lockdown) after 49 years. Until then, the patient was very healthy.” In the lower third, Graf published the current opening times of its branches in Weilheim and Murnau.

Some customers only knew after the ad that we were open,” reports Graf. After the complaint, neighbors – just as usual in bereavement – collected money and then handed him 20 euros and a condolence card. “Yes, it’s cynical,” but he can dismiss it, says Graf and adds: “Thank God it has hit.” The entrepreneur looks relieved. He got a lot of positive feedback. Friends and acquaintances would have spoken to him about it, but also people he didn’t know. Not everyone agrees. In a fax, a reader insinuated that he wanted to use this method to settle bankruptcy. That is of course not true. “I would be happy if things went back to normal.

It’s not like before. But: “Something is happening,” says Graf. The advertisement was followed by a report in the Münchner Merkur , and several colleagues contacted him, he says. He believes that more entrepreneurs are now “coming out of their cover”. Because in difficult times he misses one thing: “That you can’t hear anything.” Nothing from the large laundries. Nothing from the textile care associations. “But one thing alone doesn’t make a difference,” he says, hoping that the industry will move closer together in the future.

His regular customers, he knows by now, are behind him. Many would have been looking for textiles at home that he could work with: beds, bed linen or good clothes. That’s why Graf might want to place a second ad. “Thank you for loyal regular customers.” 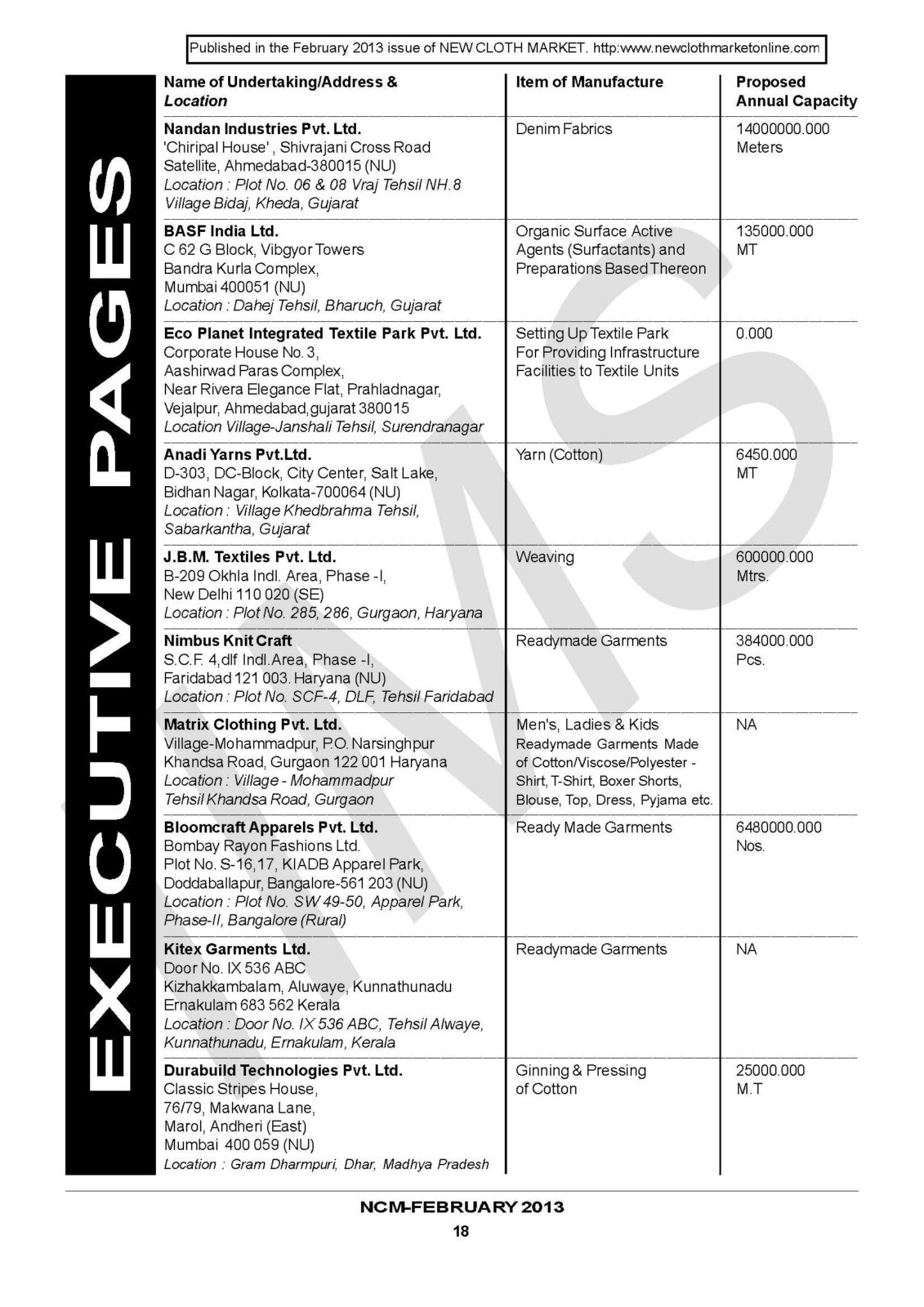 Speech of the President of China National Textile and Apparel Council 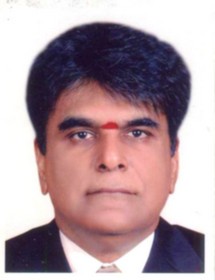