SINOMA Engineering International of China to Set up Hawassa Textile and Industrial Park S.C. in Ethiopia 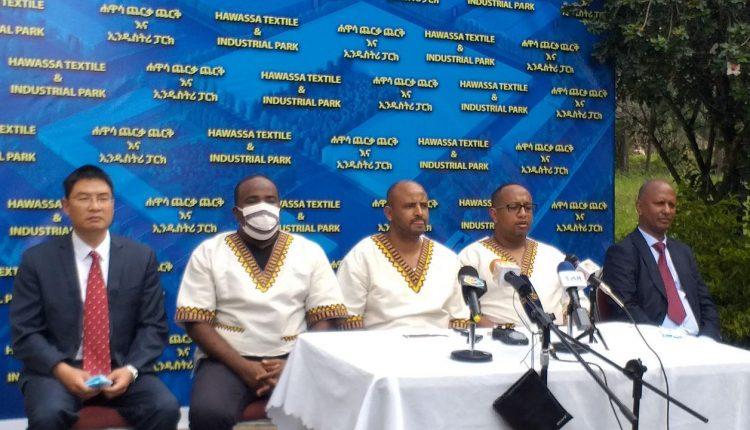 Hired by the Hawassa Textile and Industrial Park S.C., SINOMA Engineering will undertake the construction of the garment industrial park. In the past, Sinoma has built the Dangote Cement factory and was involved the development of the Hawassa and Dire Dawa industrial parks.

President of the Sidama Regional State, Desta Ledamo, and Ambassador Mesganu Arega, State Minister of Trade and Industry, have laid a corner stone for the construction of the new private industrial park on September 6, 2020.

Popular global garment companies are expected to lease shades and start manufacturing garments once the construction of the shades is completed. “Already internationally recognised garment companies such as GAP have approached us to secure shades,” Ahmed told local reporters.

Ahmed said the Hawassa Industrial is fully occupied and the garment companies working in the industrial park are looking for additional shades for expansion. “As their businesses are growing they need to expand and they are looking for more shades. The fact that we are building the new industrial park very near to the Hawassa Industrial Park and there are 120,000 trained youth in the town it would be convenient for them to lease shades from us,” he said.

Ethiopia has set out an ambitious plan to become a manufacturing hub in Africa by 2030. The government has been striving to transform the textile and garment industry. “Ethiopia is building a good will in the global garment industry like Bangladesh and Siri Lanka. In a few years’ time, the textile and garment export would be competing with coffee and oil seeds export,” Ahmed said.

Three Ethiopian investors— Tamrat Damena, Alamin Mohammed and Ahmed Abderuf—established the Hawassa Textile and Industrial Park S.C. with a registered capital of 600 million birr and acquired the Hawassa Textile Factory three years ago. The investors paid 500 million birr to acquire the 30-year old textile factory built by the former government of Ethiopia in collaboration with the Italian government in 1989.

The investors are importing and replacing the aging machineries. They have bought new machineries at a cost of 200 million birr. “We are building a new production line. Most of the machineries are installed. We have few more coming from Djibouti. We will complete the installation of the first production line and start production in three month time,” Ahmed said.

The Hawassa Textile Factory used to produce fabric threads, bedsheets and uniforms. But now the investors have decided to manufacture only fiber threads and supply it to local and foreign markets.

The first production line will have a daily production capacity of seven tons of thread. The second line will also produce seven tons. When the ongoing expansion work is completed the factory can manufacture 14 tons of fabric threads daily.

In his opening remark, Ambassador Mesganu Arega disclosed that the new industrial park will open more than 30,000 jobs and fetch 250 million dollars in export earnings. Mesganu said since the industrial park will create significant number of jobs for the local community and bring the much needed foreign currency to the country; and the federal government as well as the Sidama Regional State would provide all the required assistance to the project. “The expansion of the old Hawassa Textile Factory would enable the factory to produce fabric threads and supply them to the local garment factories and substitute the imported threads. They would also export the threads and bring foreign currency. This goes hand in hand with our government’s industrial policy that attempts to transform the manufacturing industry and boost the contribution to the national economy from the current 17 percent to 34 percent. Hence, the Ministry of Trade and Industry, Investment Commission and the regional state will closely monitor and provide all the required assistance to the project,” Mesganu said.

The guest of honour, Desta Ledamo expressed his delight with the launch of the industrial park. “We are grateful that you decided to invest two billion birr in our region and create 30,000 jobs for the youth at a time when our economy is affected by the impacts of the COVID-19 pandemic,” Desta said.

“Investment needs peace and stability. If we need jobs and foreign currency we have to take care of this project and support the investors,” he told the gathering.

According to Desta, the Sidama Regional State has put in place the necessary structure that enables it to attract investment. “Peace has prevailed in our region. We need local and foreign investors to come and invest in our region which is endowed with natural resources,” the president said.

The proximity to the capital Addis Ababa, and the availability of trained man power makes Hawassa a preferred investment destination. The express way that connects the city with Addis Ababa is near completion and an airport has been built.

Currently, there are 12 industrial parks in the country out of which seven are operational. The remaining parks will become functional in the coming Ethiopian New Year. Textiles, garments, pharmaceuticals and medical equipment are some of the products to be manufactured in the industry parks.

Loading...
Newer Post
Garment Manufacturers Association in Cambodia (GMAC) and partners to go for the green-tech clean-energy Switch Garment
Older Post
Tax Reduction on Clothing Originating in Turkey to be Imported to Jordan