Dr A Sakthivel, Chairman AEPC releasing the garment exports data for the month of July 2013 stated that, “Apparel exports were to the tune of USD 1279 million in July 2013-14 with increase of 19 per cent against the corresponding month of last financial year. In rupee terms, the exports have increased by 28 per cent in July 2013-14 over the same month of previous FY.”

Dr. Sakthivel congratulated garment exporters for showing good performance amidst this tight and fast changing economic landscape. Apparel exports have registered consecutive growth of almost 11 percent since the last four months. I appreciate all help provided by the Government to this employment generating sector.

Commenting on the US market Dr. Sakthivel said, “Apparel imports of the United States witnessed increase of 3.7 per cent in the Jan-May of 2013 from the previous year and amounted to 30.6 billion dollars. In the Jan-May 2013, US imports of apparel from India declined by -.1 per cent and reached to USD 1499 million against USD 1500 million in Jan-May 2012. US imports saw increase from all major suppliers in Jan-May 2013 over the corresponding period of last year except for Mexico and India. In Jan-May 2013 India was at 6th position. India exported US$ 285 million apparel in May 2013 with increase of 3.3 % over the same month of previous year.”

Chairman AEPC further said that to keep this rate of growth for garment sector, RBI must announce separate chapter for exports in the banking sector. I thank the officials of Commerce & Finance Ministry for taking up the matter and now the ball is in RBI court, I am hopeful they will announce this soon; looking into the fact that most of the exports are SME and this sector is job critical. Therefore, it is requested that RMG export sector, which is the largest employment generator after agriculture, should be considered under priority sector lending. With this, the bank’s commitment to RMG sector lending would be prescribed for ensuring adequate flow of credit to RMG export sector. It is also requested that a flat rate of 7.5%, as priority sector export credit to RMG export sector may be prescribed as pre-shipment and post shipment export credit.

On depreciating rupee Dr. A Sakthivel observed that, “A stable currency and exchange rate is always good in the long run. We want buyers to have long term contracts. It is advantageous in the short run; however, it is pushing up the manufacturing cost. Moreover, on account of deprecating rupees buyers starts asking for discounts. Those exporters with high import content of products are facing huge problem as they have to pay more now which is putting dent on their profits. In RMG products has almost 25% to 35% is average import content which is quite a big share. Moreover other currencies across world are also fluctuating. High inflation and input cost further reduces our margin.

BGMEA to launch Center of Innovation, Efficiency and OSH 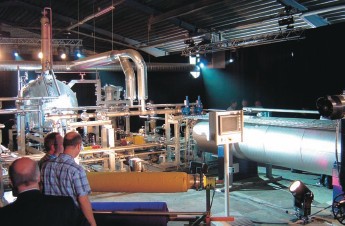