There exists no adverse relation between Spain and Bangladesh instead it is seen rare international and bilateral relation of these two countries and found scopes for engaging international trade for both of the countries. Thus, export-import trade relationship of both countries can be economically benefited.

Spain is a member of World Trade Organization (WTO) and Organization for Economic Co-operation and Development (OECD) that facilitates its international trade. From 2008 to the date Spain has been going through financial crises known as the Great Recession or the Great Spanish depression when the world also started facing financial crisis during 2007 to 2008.

The main cause of Spain’s crisis was the collapse of an enormous housing bubble and the accompanying unsustainably high GDP growth rate. In these early times Spain had a huge trade deficit, a loss of competitiveness against its main trading partners, an above average inflation rate, house price increases, and a growing family indebtedness.

The economy of Bangladesh is a developing market economy. It’s one of the most growing economy in the world in nominal terms, and 30th largest by purchasing power parity; it is classified among the Next Eleven emerging market a economies and a frontier market.

In the first quarter of 2019, Bangladesh’s was the world’s seventh fastest growing economy with a rate of 7.3% real GDP annual growth. Dhaka and Chittagong are the principal financial centers of the country, being home to the Dhaka Stock Exchange and the Chittagong Stock Exchange.

The financial sector of Bangladesh is the second largest in the Indian subcontinent. Bangladesh is one of the world’s fastest growing economies. Bangladesh presently has Gross Domestic Product (GDP) of US$ 302.6 billion averaged a GDP growth rate of 8.523% which is very impressive to the market.

Scopes of Spain and Bangladesh in international market

Spain is a country capable of producing for a lot of electronic products. In Bangladesh, there are growing demand for some of the top listed goods like vehicles, machineries and more. If the surplus of these goods is exported, a huge foreign currency may be achieved and the country may be financially benefited to cope with the existing market recession.

On the other hand, there are some top listed exporting goods of Bangladesh including clothing, labor, leather, and more. Spain can get economic advantage to some extent from international trade with Bangladesh.

Spain can get solution for reducing existing recession to some extent and Bangladesh can find a feasible solution to achieve the vision 2021 of digital Bangladesh and 2041 of being a developed country in the world.

Bangladesh government offered a special economic zone (SEZ) to Spanish investors on TICFA meeting held in Washington in 2015 as Bangladesh’s trade with the European nations rising.

Bangladesh aimed to take annual exports to Spain to $2 billion by the year-end from $1.76 billion then, according to the minister, “We are offering an economic zone to Spanish investors, and they can choose any of the 30 zones that are being developed in parts of the country now.”

Recently Export Promotion Bureau (EPB) data says that Bangladesh has gained $2.37 billion of profit with Spain bilateral trade. Garment business leader says that Spain is getting more interest day by day in Bangladesh because of the quality of the products.

How to reach pick in Spain market?

Spain is 16th largest importer in the world and 3rd largest in European Union (EU). So, the market demand of Spain is very high. Experts suggest that to become one of the top providers of the market demand, Bangladeshi Exporter garment Industries have to provide diversified and value-added products with greater quality.

Experts say that Bangladesh needs more promotional and branding activities and prove their products as a reliable source of market.

Bangladesh is a very important market for Spanish companies. Many of the companies made joint-venture with Bangladeshi companies and started business.

Angela Lalatta, Head of Business Unit Presso, AMEC (Asociación de las Empresas Industriales Internacionalizadas) see the Bangladesh market as huge with high volume, which makes it very important. You need to set up cooperation with a Bangladeshi company to make a joint venture. Not only a Spanish venture alone but they have to find the right partner. The companies who are looking to implement new innovation and technology this could be the right partner. 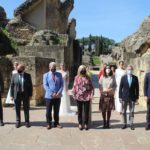