In a recent invited presentation at the World Industry Leaders Summit in China, I had the honor and the opportunity to speak to world political and economic leaders. At the summit government offcials and CEOs representing different sectors of the global industry aimed to point out specific needs of various sectors and highlight opportunities as well as challenges ahead. Not surprisingly, the traditional energy sector including fossil and coal, as well as the renewable energy including solar, wind, and geothermal were heavily represented. Others spoke of petrochemical, chemical and manufacturing sectors and seemed to share a common agenda revolving around green innovations and low carbon footprints. European political leaders (mainly) spoke of sustainable and responsible growth, while industrial leaders shared their vision of the exciting technological possibilities ahead. The majority of Chinese representatives stressed the benefits of investments in China and reminded the audience of the vast market available. Experts were enticed with considerable benefits and opportunities to share their expertise in the underdeveloped regions of the country. What surprised me the most, however, was that as far as I could gather, the textile industry was not represented!

One might be forgiven to argue that the aftermaths of the global recession are still fresh in the minds of world leaders and perhaps being conservative and pursuing the path of highest perceived potential success would attract more votes! After all, admittedly, for over a decade the traditional textile industry has suffered from a negative image and many believe that it has declined, irreversibly, especially in the industrialized world. Even if this were true, it would not apply to China, where the textile industry has bloomed and grown tremendously in the recent past, perhaps at the expense of the declining sectors in the West. In the fiber manufacturing sector alone, China is now the largest manufacturer of synthetic fibers with polyester manufacturing holding the lion’s share. This has placed China in a leading position in the global supply of this important fiber. I was among the very few academics invited and being in charge of a Polymer and Color Chemistry program (with no Textiles in the title) I wondered why the textile industry, and especially that of China, was not represented. Perhaps this was an oversight on the part of organizers; maybe there were other reasons; but I wondered in a fleeting pessimistic moment whether this was due to a portrayed image of a traditional trade with little or no progress and with no foreseeable future. This prompted me to take a frank look and share my personal observations regarding the state of our industry with the hope to shed some light on where we truly stand.

What may have not been immediately noticeable to the audience was that many of the heavily represented sectors include textiles in their core, literally! In the energy sector nano-fibers are being used to generate high effciency batteries and fuel cells while composite fibrous structures are used for the construction of wind turbines, and associated components. In the transportation sector, a large percentage of the new Dreamliner jet planes are based on carbon composite structures [1].

Boeing states that it is the company’s most fuel-effcient airliner and consumes 20% less fuel than the similarly-sized 767 [2]. The fuselage for the new Airbus is being made in North Carolina and the first unit was delivered to France in Jan of this year [3]. Likewise, automotive manufactures have increased the amount of composites used in cars to reduce weight, and improve fuel effciency. BMW is one example where carbon fiber is being used extensively in the i3 and i8 designs and is anticipated to use a mixture of composites, high-grade steel and aluminum in future designs like the BMW 7-series [4].

So what is the true state of our industry?

Without a doubt there has been a huge shift in mentality, capital investments and production methodologies. Major manufacturers in US and Europe have been leading the way in innovations and learned that improved quality, comfort, effciency while utilizing environmentally responsible processes together with informative marketing techniques must be adopted to not only remain competitive but also lead the way. And the industry is far from gone. It may be pertinent to review some of the facts regarding the current status of textiles in USA where the overall sector, from fibers to apparel, employed some 506,000 workers in 2011. The U.S. textile shipments in 2011 totaled $53 billion, while the industry invested $16.5 billion in new plants and equipment from 2001 to 2010. In this period the U.S. textile industry increased productivity by 45 percent, making textiles one of the top industries among all industrial sectors in productivity increases [5]. These do not take into account the non-traditional applications of textiles for example in the automotive, transportation, health and energy sectors.

The nonwoven industry has been growing significantly over the last several years and in North Carolina alone accounts for over $1 billion in revenues annually. Nonwovens are finding an ever increasing range of applications and through appropriate fiber selection, production, and finishing techniques nonwoven properties are being engineered based on functional requirements. Nonwoven fabrics thus enjoy a wide range of markets including medical, apparel, automotive, filtration, construction, geotextiles, as well as protective material [6].

In the field of polymers and chemicals, tremendous opportunities are afoot. Current developments in the domain include surface modification of polymers to incorporate various properties and generate multi-functional fibers (for instance flame retardant, comfortable, and antibacterial). Nanotechnology based finishes and treatments are becoming ever popular, including embedding nano silver and gold particles to impart antibacterial as well as certain optical properties. A new generation of greener synthetic fibers, based on plants, such as PLA, has also been entering the textiles market over the recent years. These fibers are offered at a premium price, although their performance properties are often not on par with that of their mainstream competitors, leaving room for further advances and innovations. Other developments include material with significantly improved weatherability, protection against damaging and harmful UV rays, resistance to bacterial and fungal attack and improved ageing, especially for industrial and outdoor applications.

Four major universities with a long history and extensive expertise in the field of textiles, including North Carolina State University, Shinshu University in Japan, the University of Manchester in England, and Hong Kong Poly Technique University have signed research and education agreements to tackle outstanding challenges on a global scale. Other similar partnerships include AUTEX, the Association of Universities for Textiles, which also aims to facilitate cooperation among universities on a global stage. Private textile companies are also collaborating with universities in developing new textile materials such as conductive fabrics with antistatic properties, electronic textiles that monitor heart rate and other vital signs and report bleeding or other catastrophic health issues and update medical teams of patient status. These innovations can significantly improve chances of survival, especially in remote regions that are diffcult to access. Lightweight antiballistic body armors and new garments that adapt to the climate to make the wearer warmer or cooler and even garments that are capable of changing color under certain conditions are also being developed both for utility (e.g. sportswear) and fashion.

The industry has also been fighting back to change its perceived negative image. According to the World Bank approximately 17-20% of industrial pollution comes from textile coloring and treatment and this includes certain toxic chemicals in water resources, some of which are permanent [7]. This has led to an overwhelming concern for sustainability (especially water use) throughout the industry. There has been a trend to reduce water use (while maintaining quality) and reduce or eliminate toxic chemicals for many years now, and every year numerous incremental changes in all aspects of textile production are reported. These include garment washing using ozone and enzymes to treat denim instead of traditional chemical approaches, as well as printing and dyeing without water or with significantly reduced water and chemical use [8].

Other notable developments include high effciency dye based solar cells, dyes used for medical applications such as PDT (Photodynamic Therapy), for self-decontaminating surfaces and for ink-jet printing where production-speed ink-jet printers are also being developed. The message is clear, not only the industry should not be considered to be on the fringes of innovation but it is truly a leading force in many arenas. This brings me back to the summit and I believe the lack of representation was likely to understanding of what textiles really are. It is our responsibility to ensure that the public and leaders are aware of the amazing range of innovations taking place in the vast world of textiles. The industry is thriving and is shaping the fabric of our lives! 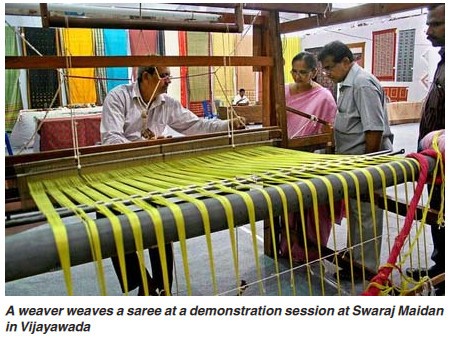 Textile traditions of Andhra Pradesh on display in Vijayawada