The field of ultrasonic is still making strides towards perfection, but already many applications of ultrasonic energy have been found in science and technology.  Ultrasonic is the science of sound waves above the limits of human audibility. The effects of ultrasound on textile finishing especially on biopolishing have been investigated. Use of biopolishing in the textile industry has become more popular in recent years. Although biopolishing offers many advantages, there are a few drawbacks when compared to traditional methods, namely, expensive processing costs and relatively slow reaction rates. Introducing ultrasonic energy during biopolishing treatment of cotton fabric significantly improves enzyme efficiency without affecting the strength of the fabric.

When a liquid, in which gas is dissolved, is irradiated by a strong ultrasonic wave, many tiny bubbles, a phenomenon known as acoustic cavitations appears.

Due to the high temperature and pressure inside the bubbles in the strong collapse, water vapor inside the bubbles is dissociated and chemical products such as OH, O, and H radicals, as well as H2O2, and O3 molecules are created inside the bubbles[1]. Because of this energy, power ultrasound can be used for the rehabilitation of industrial sites or the reclamation of polluted land by the removal of chemical and biological contamination from soil[2].

The most prevalent purpose of usage in industry is the cleaning process realized with the aid of ultrasonic cavitations. It has been an alternative solution in the cleaning of surfaces having indentations and projections such as dirty machine parts, medical equipment and electronic components that are hard to clean with classical methods. Ultrasonic cleaning will be used in the overall cleaning of foreign matters on textile material and, combined with enzymes; ultrasound will remove the disadvantage of enzymes whose moving ability is low due to their large molecules and facilitate the realization of the effect required from an enzyme[3, 4]. On the other hand, studies on usage in the textile industry are new and it has not been put into practice yet. Today there are several studies on the use of ultrasound in textile finishing processes[5-8]. 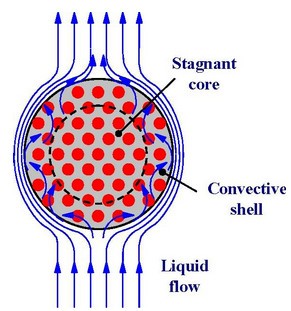 In recent years, power ultrasound has been used in dyeing, washing and the enzymatic scouring process, since it increases the mass transfer effect. Even though it is being used in these areas, it is not yet clearly understood how ultrasound improves mass transfer. It is characterized as a kind of black box, because the effect of the frequency and intensity of ultrasound, the effect of environmental conditions and the reason for the interaction between the textile surface and ultrasonic waves are not known[9].

Mass transfer is usually in limited levels in conventional pretreatment and finishing processes. For this reason, these processes need respectively longer processing times, more water and chemicals. Thus, more energy is consumed[9]. The efficiency of the wet finishing process is increased by raising the mass transfer towards to the inner parts of the textile material.

While the mass transfer between the yarns is realised by convection, diffusion is the way of mass transfer from the fibres to the solution. The step determining the speed in mass transfer is diffusion, since it happens more slowly than convection[9].

Since convective diffusion is faster than molecular diffusion, the stagnant region determines the speed of removing the impurities.  This means to contract the stagnant region by mechanical energy in so far as it is possible.  Ultrasonic energy provides us with this [9-11].

Even though enzymaticly processing cotton goods provides some savings[12], there is a drawback of high costs and relatively low reaction speed of enzymes. Both steps including the transfer of enzyme macromolecules and products obtained as a result of hydrolysis are based upon the principle of diffusion, and the speed of diffusion determines the reaction speed of hydrolysis. In general, large enzyme macromolecules (12.0 to 150.0 kDa) have lower diffusion speed. For example, in the processing of cellulose it has the tendency to react with the outer cellulosic fibres of cotton yarn. As a result, extreme fibre damage can be observed. Diffusion of the enzymes can be improved by giving mechanical movement. However, in this way it is not so easy to give mechanical movement on the interface of liquid/fibre where enzymatic reaction is realised. In this case, ultrasound technology seems as an alternative[13].

This temperature is also optimum for most of enzymatic processes. The most important point is that shock waves in ultrasound do not inactivate the enzyme. The diffusion of enzyme onto the fibre surface increases as long as it does not affect the activation [13].

The following mechanisms take place in the ultrasonic process:

Effect of Ultrasonic Energy on the Desizing and Enzymatic Scouring Processes Realised in the Same Bath:

As can be seen from Figures 4, a distinct increase was achieved both in desizing degree and in wettability value in the presence of ultrasound when the scouring process was performed with alkali pectinase after a pretreatment with Amylase for 20 minutes.  Another important point to be considered is that the wettability value was fairly high in the first 15 minutes of the scouring process realised in the presence of ultrasound.  Thus, without extending the processing time, satisfactory results can be obtained by ultrasonic scouring process that is performed for 15 minutes.

This gives rise to significant time and energy savings.  Additionally, good results obtained by single-step enzymatic processes realised in the same bath with ultrasound enable processing in the same liquor without any need of an intermediate process step. In this way, time, water and energy reductions are possible.

The reason for achieving such good results in such a short time with ultrasonic energy is thought to be the efficient cleaning of the waxes and starch which give the fabric a hydrophobic character with the aid of sound waves.

Trials, in which gray cotton woven fabric was desized with amylase enzyme and was scoured only with pectinase enzyme in a different bath (by preparing new liquor), are in this group. For these trials, fabric was subjected to the enzymatic desizing process for 20 minutes in fixed 0.75 g/l amylase concentration, and then the enzymatic scouring process was realized in a different bath with and without ultrasound in a fixed 0.75 alkali pectinase concentration for varying durations. Desizing degrees and wettability values of the trials are shown in Figures 5.

With regard to conventional processing, better results were achieved in both desizing degrees and wettability values with the aid of ultrasound.  Increasing the time of processing with alkali pectinase after 30 minutes did not increase the wettability value in the same amount.

Therefore a processing time of approximately 30 minutes is sufficient.  When the results of trials performed in the same bath and different baths were compared from the viewpoint of desizing degree and wettability value, it was observed that processing in different baths gives higher values.  The reason is thought to be the processing in new and clean liquor.

However, comparisons with regard to processing times give an interesting result.  When desizing and bio-scouring were performed in the same bath, there was a difference of 0.1 cm (4.6 and 4.7 cm) between the wettability values of 15 and 30 minutes processing times.  This difference was 0.6 cm (4.9 cm and 5.5 cm) when different baths were used. Hence, increasing the time to 30 minutes does not have a significant advantage when desizing and bio-scouring are realised in the same bath.

On the other hand, in the case of using different baths, increasing the time to 30 minutes causes an increase in wettability.  The reason for this is thought to be a certain amount of contamination because of the desizing during processing in the same bath.

A contaminated bath shows a cleaning effect in the first 15 minutes, but as the time is extended, this decreases because of excessive contamination in the bath.
Breaking Strengths and Weight Changes of Treated Fabrics

The breaking strength is also another important parameter related with the treatment conditions. In order to investigate the effect of pretreatment processes and ultrasound on the strengths of fabrics, the most effective treatment conditions from the trial plan were selected and the strength and weight changes of these fabrics were examined. It is seen that there was a difference between greige fabric and pretreated fabrics.

However, the decrease, which was slight and nearly 6%, was also an expected result because they were long time wet processes with a liquid with pH 5.5 and pH 9 at 55°C. On the other hand, the treatments with and without ultrasound showed nearly the same strength values. Finally, percentage weight changes of fabrics were investigated, and it was found that all the processes had fabrics of decreased weight. Especially after desizing with US weight loss was more evident than others were.

When ultrasound is applied in desizing, realized with amylase enzyme or the scouring process performed with pectinase enzyme, the desizing degree and fabric wettability are distinctively higher than the processing without ultrasound. This is achieved by making use of the mechanism of ultrasound to activate the enzymes with big molecules and the property of supporting the double-sided mass transfer from liquor to fabric, and from fabric to liquor. Hence, the existence of ultrasound in the processing medium increases the efficiency of the enzymes.

Some of these enzymatic processes were performed in the same bath and in a single step, others were realised in different baths. Good results obtained when ultrasound was applied in the same bath are especially important, because in this case it is possible to continue with the same liquor without any need of an intermediate process.  Thus, less water, time and energy are   consumed and less waste is generated. As a result, processing in the same bath becomes more important from the viewpoint of economy. However, in the case of using different baths, higher wettability and desizing degrees are achieved.

Especially in the case of a single bath, extending the time does not influence the wet ability very much. However, the use of different baths to extend the processing time to 30 minutes increases the wettability to a certain amount, because the bath is clean. In both cases, these processing times are much less in comparison to conventional methods. Ultrasonic energy decreases processing times significantly. In this way, less chemical is consumed and thus more ecological method is applied.

The importance of these environmentally-friendly techniques is increasing, as the industry tends to use ecological enzymatic processes more and more because of the necessity to comply with certain compulsory measures and also to achieve  environmental standards.

The effect of ultrasound power is an important technique increasing the mass transfer towards  the textile material, and in this way it is possible to eliminate the  disadvantages given above without affecting the strength of the fabric.

The authors wish to express their sincere thanks to Prof. Dr. P.V. Kadole, Principal and Prof. Dr. A.I. Wasif of Textile & Engineering Institute, India for their inspiration and moral support to publish the paper.

EU Energy crisis: This is what textile care companies need to know

We are looking to cooperate with brilliant specialty chemistry innovators: Sonovia 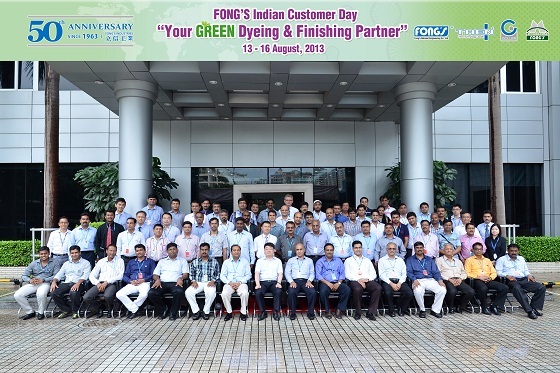 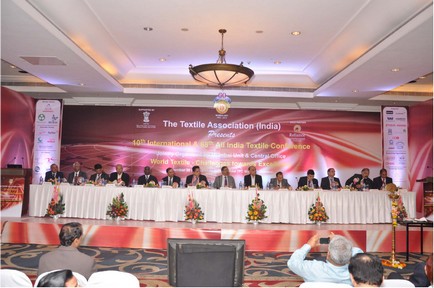