The Bangladesh Garment Manufacturers and Exporters Association (BGMEA) says: “An article titled “We are on our own’: Bangladesh’s pregnant garment workers face the sack workers” published in The Guardian on July 9, 2020 has drawn our attention.” 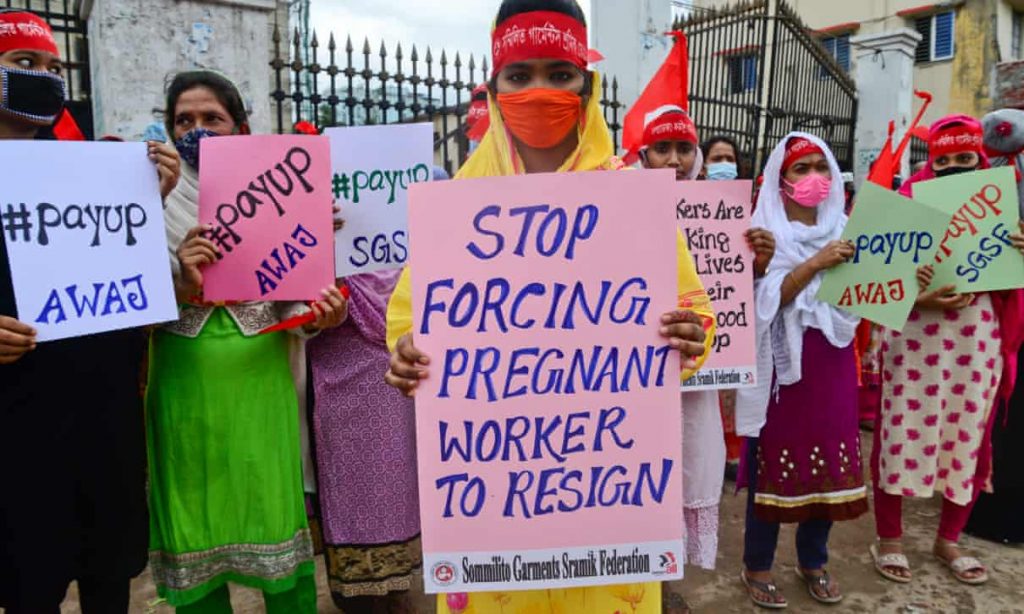 Activists protest against forced resignations and firing of pregnant women during the Covid-19 pandemic in Dhaka. Photograph: Mamunur Rashid/NurPhoto/PA Images (Courtesy: The Guardian)

Terminating pregnant workers and the ones involved in organizing labor is a crime, but it requires a thorough investigation to draw a conclusion like ‘handpick the workers they want to kick out of the industry – the ones with a voice’ and ‘termination of dozens of pregnant workers’, especially in a situation where around 348 factories have closed down and more than hundred thousand workers lost job.
We did not find the report to be methodologically correct since it was based only on the comments from the labor activists, and there was no regards for the industry to learn and appreciate the massive efforts the industry has made to protect employments of millions by maintaining all safety precautions and hygiene standards.

The report cites misleading figures and provocative statements claiming that, manufacturers are using Covid-19 as an excuse to purge “undesirable” workers, whereas the overall situation tells another story. With the immediate impact of COVID-19, 1150 of factories reported US$ 3.18 billion worth of order cancellations, and since four months of post COVID we have lost US$ 4.9 billion worth of apparel (March-June 2020 compared to the same in 2019). After a month long shutdown in April, we started re-opening of our factories in late April / May with less capacity (30%-40%) following a safe and staggered approach.

To quote the Guardian “during lockdown hundreds of thousands of workers were not paid for work they had already done”. This allegation is false and deceptive. The disbursement of the wages for the month of April, May and June was centrally coordinated by the Government of Bangladesh, as Honorable Prime Minister of Bangladesh kindly extended a timely support to this industry to digitally pay wages of the workers on time to keep the industry afloat. Besides the industry paid $539 million to workers who did not work for 25 days in April and partially May.

There may be struggles and exceptions by a few factories, but non-payment of wages to hundreds of thousands of workers is absolutely inexcusable. We demand a proper explanation of this statement from the Guardian.

However, while we condemn the generalized accusation against the industry, we would still like to investigate the allegations of pregnant workers being sacked with specific factory references.

And finally we are facing dire consequences from the western buyers due to cancellation of goods and unethical behavior of brands refusing to pay or asking for unrealistic discounts. We seek the help of the Guardian to track the buyers from UK and reconsider their decisions so that we can keep providing for the millions that make their garments.

Cosmeto-textiles: State of the Art and Future Perspectives