Since December 1, 32 countries have cancelled the GSP treatment for China’s export products 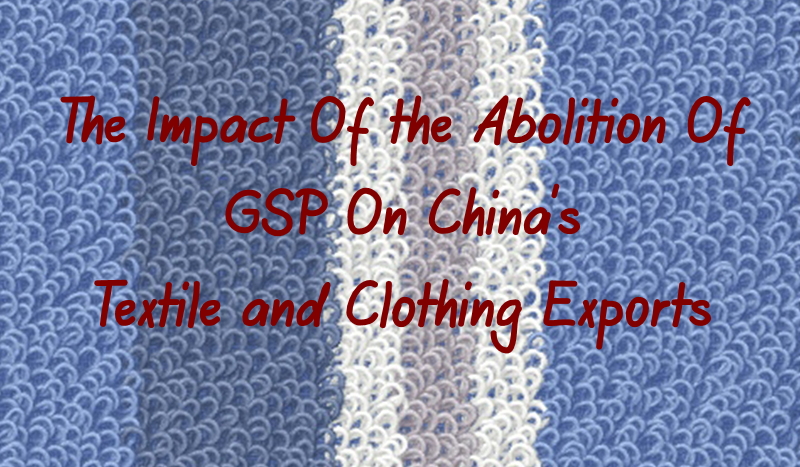 Since December 1, 32 countries have cancelled the generalized system of preferences (GSP) treatment for China’s export products (27 member states of the European Union and the United Kingdom, Canada, Turkey, Ukraine and Lichtenstein). In 2020, the total trade volume between China and Europe will be more than 45000 billion yuan, ranking the second among China’s trade partners, and the first is ASEAN. However, all the 32 countries are concentrated in Europe, It shows that the real impact of this incident is limited to Sino EU trade relations, and China’s trade with the rest of the world has not been affected. China’s textile and clothing exports to Europe and the export amount account for a relatively heavy share of the whole industry. Therefore, theoretically canceling the GSP will have a certain impact on textile and garment enterprises.

China’s general administration of customs stopped issuing certificates of origin under the generalised system of preference (GSP) for exports from December 1 to the 32 countries, which no longer offer China GSP status. The GSP system, used around the world, reduces levies on certain imports from developing countries and incentivises exports from less developed economies, promoting economic growth. The system also helps to bring down the cost of import goods for donor economies. Chinese companies feel that the impact will be limited, compared to other problems like inflation, a Chinese government-controlled media outlet reported.

According to customs statistics, in September 2021, China’s export to the EU will further reduce to 2.9%, among which the growth rate of large categories of knitted and woven garments will increase to 19%. From January to September, China’s textile and clothing exports to the EU reached 35.18 billion US dollars, accounting for 15.10% of China’s total textile and garment exports, a year-on-year decrease of 17.4%, and an increase of 14.6% over the same period in 2019. Among them, the export of knitted and woven garments increased by 15.7%, 5.9% compared with that in 2019; If the UK, Canada, Turkey and other five countries are added, the proportion of China’s textile and clothing exports will exceed 20%.

So will abolishing the GSP treatment restrict China’s textile and garment export? It is generally believed that the form is greater than the practical significance, but it plays a guiding role in the future trade relations between China and the United States. On the one hand, the countries mentioned in this announcement have already cancelled the GSP treatment for China a few years ago. Now it is just a repetition of the old tune. Among them, the EU (including the UK) and Turkey cancelled the GSP treatment for China on January 1, 2015, Canada, Switzerland and Lichtenstein on July 1, 2014, and Ukraine canceled the GSP treatment for China in 2012 earlier. On the other hand, China has developed strongly in recent years, and has signed free trade agreements with more and more economies, such as China ASEAN Free Trade Area, China Japan regional comprehensive economic partnership agreement (RCEP) and China EU comprehensive investment agreement (CAI). Enterprises can choose the most favorable tariff arrangement according to their own situation. At present, there are still Australia, New Zealand and Norway that give China GSP treatment.