Why textiles industry has failed to perform? 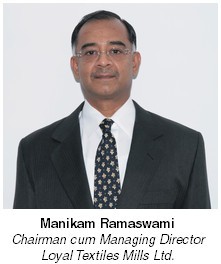 Export incentives for cotton and yarn should favour domestic value-adding companies, rather than competitors across the border.

Export policy errors and a non-competitive knitwear industry have impacted the sector’s performance.

The textile industry, as per its vision document, was poised to achieve $100-billion turnover, contribute $50 billion to India’s exports, and increase its employment from 3.5 crore by at least 1 crore. That has not happened, despite a slew of incentives.
The government has provided the industry with more than Rs 10,000 crore for TUF (Technology Upgradation Fund) interest subsidy so far, and is to provide an equivalent amount in future. It has also created 42 textile parks by spending Rs 1500 crore, though with questionable success. Deferred loan repayments in the past have cost the taxpayer more than Rs 2000 crore. Yet the textile industry has created just 25 lakh extra jobs, and reached only $18 billion in exports.

Where did the textile industry go wrong, in spite of spinning and grey-fabric manufacturing capacities being the most competitive ones globally? Why has it not achieved its own targets, despite the government keeping up its part of the bargain?

The real reasons for the textile industry’s poor showing are three-fold.

First, pre-2008, the government followed non-inclusive economic policies. Even when the external current account was in good health, the government incentivised foreign money flow into the stock exchange, and allowed ECBs to fund rupee expenditure. Even after the RBI brought ECBs under the restricted list, a few privileged companies brought in nearly $4 billion ECBs each month. This huge influx of foreign money, for rupee-designated expenses, triggered a spurt in money supply and inflation. The RBI kept mopping up excess liquidity and drove interest to higher levels. The appreciating rupee, high interest, and high inflation were driving export-intensive manufacturing out of India.

The pre-election period reversed it to a large extent. Farm loan write-off, higher support prices, and NREGA put money in the hands of the poor. The global meltdown took back some of the hot money, restoring the rupee to near-normal levels, and normalcy returned to textiles.

Second, not long after normalcy returned, the government came out with an ‘anti-national policy’ of making Indian cotton 10 per cent cheaper for Chinese and Bangladeshi mills — by giving 5 per cent incentives to cotton exporters, and another 10 per cent effective discount to exporters through the government-controlled Cotton Corporation. The incentives were given to cotton exporters even for the previous year’s exports, clearly highlighting the beneficiaries for whom the scheme was devised, most certainly not cotton farmers.
The entire textiles industry lost money until the export incentives on cotton were removed.

Third, the Government, motivated by the knitwear exporters of Tirupur, came out with policies which not only made the textile industry lose more than $3 billon, but also impacted international textile trade.

Global cotton stocks had dropped to precarious levels, following two consecutive years (2009 and 2010), when consumption was in excess of production. Cotton stocks lasting out until the beginning of the next crop year became a serious concern. This concern began lifting the international cotton prices, as well as prices of yarn, fabric and garments. The Tirupur exporters, rendered non-competitive due to very high cost of zero discharge, low levels of mechanisation and disproportionately high overheads, instead of focusing inward to solve their problems, were demanding for subsidised yarn at far lower than international prices.

The Government, instead of removing the curiously high DEPB of 7.2 per cent on yarn, which was making Indian yarn available more cheaply to Bangladesh knitters than to Indian downstream producers, banned further exports of cotton and removed all incentives for yarn. The ban led to an artificial shortage in the international market and prices shot up. This was because India, which was seen as having an 80 lakh bale surplus, was expected to bridge the supply gap. This affected Indian cotton prices too. Disconnect with global markets due to the ban kept Indian cotton prices around 15 per cent lower than international prices.

Although yarn was available a good 4-5 per cent cheaper to the local knitwear exporters, they were unable to compete, due to their internal problems. Instead of addressing them, they got the government to ban export of cotton yarn. The international prices of yarn shot up to reach unviable levels, and consequent increase in garment prices caused serious loss of demand at the retail levels.

By the time yarn exports were allowed after 3.5 months, India had accumulated 600 million kg and there was a 20 per cent demand destruction in volume terms. The huge stockpile and falling demand led to a 50 per cent drop in the international prices of yarn and cotton. Knitwear makers made the error of depending on lobbying as against improving internal competitiveness. Spinners wanted to transfer farmers’ profits into their balance-sheets. The net result: More than $3 billion losses to the textile industry.

Lessons to be Learnt

The export incentives/drawbacks given should be given in such a way that the raw material/intermediary products, such as yarn and fabrics, are available to the domestic value-adding companies at an effectively lower cost than to competitors across the border.

This can be easily achieved by a modular drawback regime, which takes the drawback given to the previous stage as the input, while calculating the drawback of the next stage. This, and this alone, is sufficient to remove distortions in the entire textile value chain.

The leadership of the different sectors of the textile value chain should understand that it is the relative cost of input and not the absolute cost of input that matters when it comes to competitiveness. The leadership should encourage their sectors to focus on compliance and competitiveness, and not demand taxpayers or raw material suppliers to subsidise their operations.